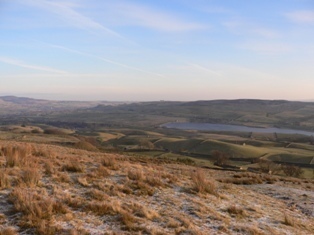 Scientists from Durham University have deciphered the landforms and created a model of the British and Irish Ice Sheet (BIIS) which reveals for the first time how glaciers reversed their flows and retreated back into upland regions from where they originated.

Drumlin-strewn landscapes can be seen along the A66 road through the Eden Valley (near Appleby) and across the Solway and Lake District lowlands, the Northern Pennines, and through the Tyne Gap and the valleys of southern Scotland.

The research, funded by the Natural Environment Research Council, is published in the Journal, Quaternary Science Reviews.

During the last glacial maximum, around 21,500 years ago, the BIIS built up on the high land of the Lake District, north Pennines and Scottish Southern Uplands; as more snow fell in these areas and local ice caps thickened, glaciers flowed into surrounding lowlands as expected.

The new reconstruction of the movement of the ice sheet, compiled by the Durham University research team, reveals an unusual twist once the glaciers filled lowland areas. As the ice sheet evolved from the coalescence of the upland ice caps, it flowed out towards the Irish Sea, eventually becoming so thick over the Solway Lowlands that it reversed its flow back up the valleys, re-adjusting the landforms it had created during earlier stages of growth.

The research team led by Dr David Evans, from the Department of Geography at Durham University plotted the progress of the ice sheet between 26,000 and 16,000 years ago. Using maps of superimposed drumlins, ancient temperature records, and computer modeling, the team profiled the size, extent and flow directions of the ice-sheet, and reconstructed its movement through time.

Dr Evans said: “The stereotypical image of Ice-age Britain is of ice rolling in from the Arctic but this is not an accurate description of what happened. Britain was cold enough for ice to form in the uplands, growing and coalescing to produce an elongate, triangular-shaped dome over NW England and SW Scotland around 19,500 years ago.

“The Ice sheet then moved downhill, as one would expect. Our findings show that the lowland ice became so thick that it began to move in unexpected ways - the ice moved back uphill from where it originally came. Recession and a series of complex ice flow directional switches took place over relatively short timescales.”

Four major ice flows have been identified across northern Britain and Dr Evans’ team has produced case studies of drumlin and lineation mapping that show that these glacier flow directions switched significantly through time.

The pressure of the ice flows became sufficient to deform sediments at the base of the ice sheet, resulting in the moulding of the sediment into streamlined landforms like drumlins.

Many of the fields of northern England and southern Scotland have been cleared of their boulders during hundreds of years of agricultural improvement. This stony, unworkable material was called ‘till’, the term now used by glacial researchers to describe sediment laid down at the base of ice sheets and glaciers.

A close look at many of the distinctive stone walls in the region of the North Pennine chain, often reveals the use in their construction of Scottish and Lake District ‘erratics’, stones which are quirks of glacial ice flows. Many of these erratic stones were transported hundreds of miles away from their origin by the complex and often reversed movement of the glaciers.

Dr Evans says: “The Durham model shows that an ice sheet can reverse its flow in a hundred or so years and when this happens, it creates unique features in our landscape. Elongated drumlins and meltwater channels in northern England and southern Scotland provide evidence of this unique phenomenon. ”

“The ice sheet had no real steady state but rather was mobile and comprised constantly migrating dispersal centres and ice divides which triggered significant flow reversals. The occurrence of Lake District material in Pennine dry-stone walls is a clear indication that during the last glaciation of Britain, ice sheet flow directions were at times reversed.”

1. Build up of snow and ice on higher ground.
2. Ice thickening results in ice flow down valleys that drain the uplands.
3. Valley ice from different upland sources fuse or coalesce.
4. Ice thickens in the lowlands and the ice sheet dispersal centres migrate, forcing ice flows to become independent of the underlying hills and valleys.
5. In some areas the ice flows reverse and in places (e.g. Vale of Eden) actually move back uphill.