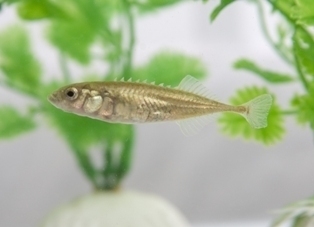 Although worlds apart, the way fish learn could be closer to humans’ way of thinking than previously believed, research suggests.

A common species of fish which is found across Europe including the UK, called the nine-spined stickleback, could be the first animal shown to exhibit an important human social learning strategy. The sticklebacks can compare the behaviour of other sticklebacks with their own experience and make choices that lead to better food supplies, according to the study by St Andrews and Durham universities.

The researchers suggest these fish might have an unusually sophisticated social learning capability not yet found in other animals, called a ‘hill-climbing’ strategy.

This ability of picking the best quality food patch by comparing how successful others are at getting food from it against their personal experience has not been shown before in animals, say the scientists.

The team of researchers, which was funded by the Biotechnology and Biological Sciences Research Council, suggests that in the case of the nine-spined stickleback it is likely to be a case of ‘needs must’ as the anatomy of this particular species of fish does not offer significant protection from predators to forage alone safely. They may have been ‘forced’ to learn from others about where to feed while hiding from predators as they themselves cannot risk looking for food sites in the open.

The scientists say the findings, published in the academic journal Behavioral Ecology, show that the cognitive mechanisms underlying cumulative cultural evolution may be more prevalent in nonhuman animals than currently believed. The findings show that big brains, like those in humans, are not necessarily needed as a pre-requisite for cumulative culture.

The researchers say the findings contribute to the understanding of brain evolution and the types of brain required for certain cognitive functions, both in humans and animals.

“‘Hill-climbing’ strategies are widely seen in human society whereby advances in technology are down to people choosing the best technique through social learning and improving on it, resulting in cumulative culture.

“But our results suggest brain size isn’t everything when it comes to the capacity for social learning.”

First, they were free to explore the feeder at each end during a number of training trials, where one feeder supplied more worms than the other, called the rich feeder. They were then tested to see which feeder they preferred. In the second training trial, those fish that had learned a preference for the rich feeder observed other fish feeding but this time the rich and poor feeders were swapped round with the rich feeder either giving even more worms than the one the fish previously got their food from or giving roughly the same or less. In the second test, the fish were again free to swim around and choose their feeder.

Around 75 per cent of fish were ‘clever’ enough to know from watching the other fish that the rich feeder, previously experienced first hand themselves as the poor feeder, gave them the better pay off. In comparison, significantly fewer fish preferred the feeder that appeared to be rich from watching others if they themselves had experience that the alternative feeder would give roughly the same or more food.

The team’s further studies have found that the likelihood of copying the behaviour of others increased with the rate at which the others fed.

Dr Kendal said: “Lots of animals observe more experienced peers and that way gain foraging skills, develop food preferences, and learn how to evade predators. But it is not always a recipe for success to simply copy someone. Animals are often better off being selective about when and who they copy.

Co-author Professor Kevin Laland from the School of Biology at St Andrews University added: “Nine-spined sticklebacks may be the geniuses of the fish world. It’s remarkable that a form of learning found to be optimal in humans is exactly what these fish do.”

The research was carried out at St Andrews University where Dr Kendal was employed before joining Durham University in 2007.

Facts about nine-spined sticklebacks
• Stickleback species are found in fresh and marine water environments in Europe, Asia, and North America, including in weedy ditches and rivers.
• They feed on small crustaceans and fish larvae.
• In breeding season, the male builds a nest suspended on a piece of waterweed. The female is attracted over by the male and she lays eggs inside the nest. The male guards these eggs and the young fry when they hatch. When the young have their spines, he drives them away to look after themselves.
(Source: adapted from Wikipedia)