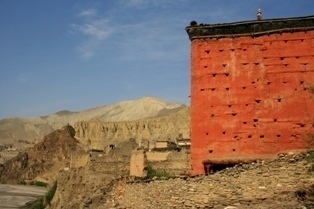 The monastery in Kagbeni, established in 1429 in the Buddhist kingdom of Mustang, Nepal.

The secret of a successful sandcastle could aid the revival of an ancient eco-friendly building technique, according to research led by Durham University.

Researchers, led by experts at Durham’s School of Engineering, have carried out a study into the strength of rammed earth, which is growing in popularity as a sustainable building method.

Just as a sandcastle needs a little water to stand up, the Durham engineers found that the strength of rammed earth was heavily dependent on its water content.

Rammed earth is a manufactured material made up of sand, gravel and clay which is moistened and then compacted between forms to build walls. Sometimes stabilisers such as cement are added but the Durham research focussed on unstabilised materials.

The research, funded by the Engineering and Physical Sciences Research Council (EPSRC) and published in the journal Geotechnique, showed that a major component of the strength of rammed earth was due to the small amount of water present.

Small cylindrical samples of rammed earth underwent “triaxial testing” – where external pressures are applied to model behaviour of the material in a wall. The researchers found that the suction created between soil particles at very low water contents was a source of strength in unstabilised rammed earth.

They showed that rammed earth walls left to dry after construction, in a suitable climate, could be expected to dry but not lose all their water. The small amount of water remaining provided considerable strength over time.

The researchers say their work could have implications for the future design of buildings using rammed earth as the link between strength and water content becomes clearer.

There is increasing interest in using the technique as it may help reduce reliance on cement in building materials (cement production being responsible for five per cent of man’s CO2 output (1)). Rammed earth materials can usually also be sourced locally, thereby reducing transport needs.

As well as informing new build designs the team hopes their findings could also aid the conservation of ancient rammed earth buildings by putting methods in place to protect against too much water entering a structure, which would reduce its strength. Paul Jaquin, a researcher on the project is now working for an engineering consultancy (Ramboll, UK) on new earth building projects around the world, using this research to better engineer buildings.

Research project leader, Dr Charles Augarde, of Durham University’s School of Engineering, said: “We know that rammed earth can stand the test of time but the source of its strength has not been understood properly to date.

“Our initial tests point to its main source of strength being linked to its water content.

“By understanding more about this we can begin to look at the implications for using rammed earth as a green material in the design of new buildings and in the conservation of ancient buildings that were constructed using the technique.”

Rammed earth was developed in ancient China around 2,000 years before Christ, when people used the technique to build walls around their settlements and the technique spread throughout the world - as documented in another recent publication by the researchers linking up with Dr Chris Gerrard, of the Department of Archaeology, at Durham University (*).

Parts of the Great Wall of China and the Alhambra at Granada in Spain were built using rammed earth.

In the UK the technique was used to build experimental low cost housing, in Amesbury, Wiltshire, following the end of the First World War, and it is a recognised building method in parts of Australia and the USA.

The popularity of eco-friendly homes showcased on television programmes such as Grand Designs has also brought the technique to people’s attention.

Dr Augarde is a co-director of Earth Building UK (EBUK), a new association established this year to foster the conservation, understanding and development of building with earth in the United Kingdom.

EBUK brings together builders, academics, researchers, architects, engineers, manufacturers and many more to work in areas of common interest at a national and local level.

Tom Morton, Secretary of Earth Building UK, said: “This kind of research is very valuable as the construction industry analyses environmentally sound, traditional ways of building and adapts them for sustainable construction in the 21st century.

“Such low-carbon technologies are most likely to succeed by marrying the expertise of our research universities, such as Durham, with the commercial understanding of the wider industry and we are seeing a number of very exciting developments in this area.”