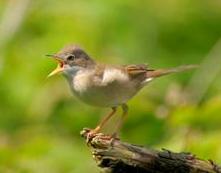 Bird migrations will get longer according to a study of the potential impacts of climate change on the breeding ranges of migrant birds.

A team of scientists, led by Durham University, have published findings that show that the marathon flights undertaken by birds to spring breeding grounds in Europe, are going to turn into even more epic journeys; the length of some migrations could increase by as much as 250 miles.

The research team, funded by the Natural Environment Research Council and the RSPB, looked at the current migration patterns of European Sylvia warblers, a group of birds that are common residents and visitors to Europe, like the Blackcap. Published in the Journal of Biogeography, the scientists demonstrate evidence of potential breeding ranges shifting northwards in the future, while the wintering ranges remain stationary for many species

The team used simulation models to see how climate change might affect warblers and found that climate change will have significant impacts, particularly on the projected migration distances for some of the long distance fliers.

Some 500 million birds are estimated to migrate to Europe and Asia from Africa; birds as small as 9 grams undertake the annual migration of 1,000s of miles between the two continents to find food and suitable climate. Birds have to put on a large amount of weight as fat before migrating long distances; they even shrink the size of some of their internal organs to become more fuel efficient. Some species must double their weight to have enough energy to undertake the huge journeys. The first of these migrants are now starting to reappear once again in the UK countryside.

Team leader, Dr Stephen Willis of Durham University, said birds face an increasing fight to survive: “Most warblers come here in spring and summer time to take advantage of the surplus of insects, and leave for warmer climes in the autumn. From 2071 to 2100, nine out of the 17 species we looked at are projected to face longer migrations, particularly birds that cross the Sahara desert.

“Our findings show that marathon migrations for some birds are set to become even longer journeys. This is bad news for birds like the Whitethroat, a common farmland bird. The added distance is a considerable threat.”

Co-author of the research paper, Professor Rhys Green of Cambridge University and RSPB said: "These tiny birds make amazing journeys, pushing themselves to the limits of endurance. Anything that makes those journeys longer or more dependent on rare and vulnerable pit-stop habitats used for refuelling on migration could mean the difference between life and death.”

In terms of EU policy, the predicted effects of climate change on birds indicate a need for an appraisal of the designation of protected areas for migrant species, including key areas used for stopovers on long-distance migrations. The protection of bird species within the European Union is covered by legal directives that require member states to designate and protect Special Areas of Conservation (SACs) for habitats and Special Protection Areas (SPAs), the latter specifically designated to protect birds.

The research predicts that some species that fly long distances (on average 2,800 miles to 3,700 miles), are likely to face significantly longer flights, up to 250 miles longer, and shorter distance fliers may face journeys of up to 125 miles longer. Some birds cross the Mediterranean Sea and the Sahara in one go, whilst others pause to refuel in North Africa before crossing the desert. Night flying when the temperature is cooler is a technique that is also used by some of the long distance fliers.

Northern parts of the species’ ranges are expected to become of increasing importance and in some cases, species of northern populations are already thought to be exhibiting increases. Some birds might also be able to find new short distance routes. One common migrant, the Blackcap has already started spending winters in the UK.

Professor Rhys Green said: "These findings come as many people in the UK are enjoying the sights and sounds of their favourite birds returning after a winter in Africa. The challenges are large if we are to continue to see and hear these harbingers of the spring in anything like the numbers we are used to witnessing.

"We have already seen evidence that birds' ranges are moving north to track suitable climate conditions in the way predicted by past modelling. This latest research suggests they will face an increase in the length of an already arduous journey.”

Assuming increases in the fuel requirements for longer migrations can be physiologically accommodated by birds, they are likely to require more time for feeding prior to migration and/or additional stopovers to feed.

Nathalie Doswald, a student on the Durham team, said: “The projected distances for migrations would require long and short distance fliers to increase their fuel loads by 9 per cent and 5 per cent of lean body mass respectively. The predicted future temperature changes and the associated changes in habitat could have serious consequences for many species.”

Dr Willis said: “Some species may be able to adapt and change, for example by adopting shorter migration routes, if they can find enough food at the right time. Bird migrations are incredible feats of stamina and endurance but, as temperatures rise and habitats change, birds will face their biggest challenge since the Pleistocene era.”

Average migration distances – now and (in brackets) predicted for the future.

The four species with the largest predicted migration increases: