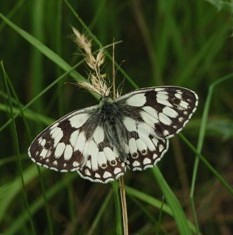 Species are adapting slowly to climate change and ‘assisted colonisation’ can play a role in helping wildlife survive in a warming world.


A team of researchers, led by biologists at Durham and York Universities, has shown that translocation to climatically-suitable areas can work and that butterflies can survive beyond their northern ranges if they’re given a ‘helping hand’ to get to suitable new habitats.

The research, funded by NERC and The British Ecological Society (BES), aimed to examine the implications of climate change for the conservation and management of biodiversity by looking at the distribution of butterflies.

The research team ran a series of climate-change models to identify areas in northern England where, as a result of the climate warming of recent decades, butterflies found further south might thrive but which they had not yet reached. Researchers then transported Marbled White and Small Skipper butterflies to two of these climatically-suitable sites that were well beyond the butterflies’ northern range boundaries.

Between 1999 and 2000, free flying individuals were collected from sites in North Yorkshire and translocated, using soft cages, to release sites in disused quarries in County Durham and Northumberland. These sites had ample suitable breeding habitat for the butterflies, and were chosen after careful discussion with local experts. After release, the introduced populations were monitored over the following 8 years.

The research, published in ‘Conservation Letters’, involved Durham University, the University of York, the University of Leeds, the Centre for Ecology and Hydrology, and Butterfly Conservation. The team’s modelling shows that there is a lag between climate change and distribution change, and the practical results prove that butterflies can flourish in habitats that they might not normally be able to reach.

Professor Brian Huntley from Durham University said: “The success of the assisted colonisation demonstrates for the first time that moving species to areas identified as newly climatically-suitable can play a role in wildlife conservation. This is likely to be especially important for rare species and for those species that experience difficulty in crossing areas of unfavourable habitat.”

“The results show that, although areas in the north are becoming suitable for a wider range of butterflies, shifts in butterfly distributions are lagging behind climate change because many species have limited mobility or struggle to cross large distances between sites offering suitable habitat.”

Although butterflies can be a good indicator of climate change, colonisation of newly-suitable sites can be severely affected by land-use changes that lead to large gaps between suitable habitat patches. With shrinking habitats, the problem will be even more acute for weaker flying butterflies with more limited flight potentials.

Dr Jane Hill, from the Department of Biology at the University of York said: “Many British butterflies are declining because of habitat destruction. These results suggest that, providing there is little risk, assisted colonisation might be a cost-effective tool for conservation.”

Prof. Huntley said: “Our experiment also demonstrate the reliability of our predictions of which areas are newly suitable as a result of recent climate change. This is important because, as climate continues to change this century, successful biodiversity conservation will require reliable predictions of species’ responses to the changing climate.”

The results illustrate the need for a rethink on urban and rural development policies – a sufficient density of habitat patches is vital to assist butterflies and other species to shift their distributions in response to climate change.

Richard Fox, Surveys Manager for the UK charity Butterfly Conservation, who collaborated in the research said: “Britain’s butterflies are in steep decline largely due to the destruction and fragmentation of their habitats by human activity such as intensive farming and forestry, and urban development. The warming climate that Britain has experienced over the past few decades should have been a blessing for butterflies, but in reality few have benefited.”

“Research, using millions of butterfly sightings collected by our volunteer observers, has suggested that even those butterflies that have spread northwards and colonised new territory as a result of climate change, have been held back by lack of habitat to act as stepping stones or green corridors. As climate change accelerates, more and more species will be threatened by it.”

1. Can be seen as a butterfly end of June to the start of August.

2. One of the most common species of butterfly.

4. The caterpillars spend the winter cocooned inside the grass stem.

2. One of the more common species in the south.

4. The female drops her eggs to the ground rather than choosing a specific grass species.

5. The Red Fescue (Festuca rubra) and Sheep's Fescue (F. ovina) are the main plants that the caterpillars use.