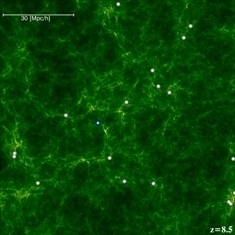 Scientists have used a computer simulation to predict what the very early Universe would have appeared like 500 million years after the Big Bang.

The images, produced by scientists at Durham University’s Institute for Computational Cosmology, show the “Cosmic Dawn” - the formation of the first big galaxies in the Universe.

The Cosmic Dawn began as galaxies began to form out of the debris of massive stars which died explosively shortly after the beginning of the Universe. The Durham calculation predicts where these galaxies appear and how they evolve to the present day, over 13 billion years later.

The researchers hope their findings, which highlight star forming galaxies, will improve their understanding of dark matter – a mysterious substance believed to make up 80 per cent of the mass in the Universe.

Gravity produced by dark matter is an essential ingredient in galaxy formation and by studying its effects the scientists eventually hope to learn more about what the substance is.

The research is published in the Monthly Notices of the Royal Astronomical Society and was funded by the Science and Technology Facilities Council (STFC) and the European Commission.

The work combined a massive simulation showing how structures grow in dark matter with a model showing how normal matter, such as gas, behaves to predict how galaxies grow.

Gas feels the pull of gravity from dark matter and is heated up before cooling by releasing radiation and turning into stars.

The simulation images show which galaxies are forming stars most vigorously at a given time. Although the galaxies are biggest at the present day, the rate at which they are making new stars has dropped greatly compared with the rate in the early Universe.

The calculations of the Durham team, supported by scientists at the Universidad Catolica in Santiago, Chile, can be tested against new observations reaching back to early stages in the history of the Universe almost one billion years after the Big Bang.

Lead author, Alvaro Orsi, a research postgraduate in Durham University’s Institute for Computational Cosmology (ICC), said: “We are effectively looking back in time and by doing so we hope to learn how galaxies like our own were made and to understand more about dark matter.

“The presence of dark matter is the key to building galaxies – without dark matter we wouldn’t be here today.”

Co-author Dr Carlton Baugh, a Royal Society Research Fellow, in the ICC, at Durham University, said: “Our research predicts which galaxies are growing through the formation of stars at different times in the history of the Universe and how these relate to the dark matter.

“We give the computer what we think is the recipe for galaxy formation and we see what is produced which is then tested against observations of real galaxies.”

Professor Keith Mason, Chief Executive of the Science and Technology Facilities Council, said: “Computational cosmology plays an important part in our understanding of the Universe. Not only do these simulations allow us to look back in time to the early Universe but they complement the work and observations of our astronomers.”