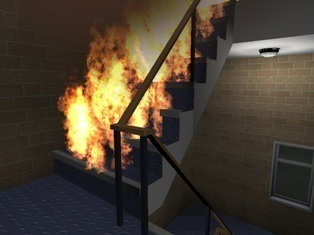 Commercial games such as Doom 3 and Half Life 2 can be used to build virtual worlds to train people in fire evacuation procedures by applying the games’ underlying software code, according to the Durham University researchers.

A 3D model of a real world building and three fire evacuation scenarios were programmed in three weeks by a single developer complete with smoke and fire. The Durham experts say this is significantly quicker and more cost-effective than using traditional virtual reality toolkits or writing the code from scratch.

The use of virtual reality toolkits often requires more advanced programming skills and integration of different components to build a 3D model making it a lengthier and more expensive process, say the scientists.

Click here to see a video of the virtual reality model (1min30secs):
http://www.dur.ac.uk/shamus.smith/fire/

The study, published in the Fire Safety Journal, found that games from the First Person Shooter genre, in which the player sees the environment from the first person perspective and normally involves the player using weapons to fight a number of enemies, have the greatest capability and resources for modification.

The scientists say virtual environments can be used to help identify problems with the layout of a building, help familiarise people with evacuation routines and teach people good practice in fire safety.

Previous research has shown that there are often two main reasons why evacuations in a real scenario fail. One is poor layout of the building and the other is people not following evacuation procedures due to panic or unfamiliarity with the protocol.

In the study, which was partly funded by the Nuffield Foundation, the researchers looked at the capabilities of a number of commercial computer games such as Far Cry, Quake III Arena, Doom 3, F.E.A.R., Half-Life 2, and Counter-Strike: Source. They looked at the underlining game technology, including the capabilities for 3D rendering, sound, user input and word dynamics.

The research team found that these games have some significant advantages. They are robust and extensively tested, both for usability and performance, work on off-the-shelf systems and can be easily disseminated, for example via online communities. The scientists say the code within these games also enables easy programming of features such as wind, smoke, fire and water.

Lead author Dr Shamus Smith from Durham University’s Computer Science department explains: “Although virtual environment toolkits are available, they usually only provide a subset of the tools needed to build complete virtual worlds. Although you can create fire and smoke for example, it is not very straightforward.

“In order to include these features using toolkits, it often requires additional programming skills and a substantial time investment on the part of the developer. By using readily available computer games, these features can be very easily simulated and are obviously vital in creating a virtual fire evacuation scenario”.

Steve Wharton, Deputy Community Safety Manager at County Durham and Darlington Fire and Rescue Service commented: “Using virtual models such as this one is an excellent way to raise fire safety awareness and test the effectiveness of a building’s design. Virtual models also provide an effective way to train fire-fighters in a realistic, yet safe, environment.”

As part of the study, participants tested the virtual environment. They were told of a fire in the building and asked to find their way out. Most people found the simulated environment to be realistic although those with gaming experience performed better than those without.

The virtual reality model was built based on Durham University’s Computer Science department consisting of three floors with a number of offices, meeting rooms and a reception. The Source engine which underlines the game Half-Life 2 was used to programme it with features such as fire alarm triggers, fire exit signs, and spreading fires.

In other studies, gaming technology has been used to build virtual environments to simulate lab accidents, teach people about cooking safety, and to help ‘treat’ people suffering from arachnophobia and claustrophobia.