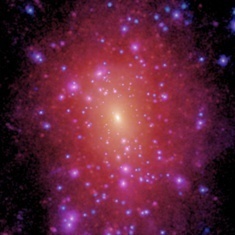 A map of the dark matter in six halos similar to that of the Milky Way.

The search for a mysterious substance which makes up most of the Universe could soon be at an end, according to new research.

Dark matter is believed to account for 85 per cent of the Universe’s mass but has remained invisible to telescopes since scientists inferred its existence from its gravitational effects more than 75 years ago.

Now the international Virgo Consortium, a team of scientists including cosmologists at Durham University, has used a massive computer simulation showing the evolution of a galaxy like the Milky Way to “see” gamma-rays given off by dark matter.

They say their findings, published in the prestigious scientific journal Nature (Thursday, November 6), could help NASA’s Fermi Telescope in its search for the dark matter and open a new chapter in our understanding of the Universe.

The Virgo Consortium looked at dark matter halos – structures surrounding galaxies – which contain a trillion times the mass of the Sun.

Their simulations – called The Aquarius Project - showed how the galaxy’s halo grew through a series of violent collisions and mergers between much smaller clumps of dark matter that emerged from the Big Bang.

The researchers found that gamma-rays produced when particles collided in areas of high dark matter density could be most easily detectable in regions of the Milky Way lying close to the Sun in the general direction of the galaxy’s centre.

They suggest the Fermi Telescope should search in this part of the galaxy where they predict that gamma-rays from dark matter should glow in “a smoothly varying and characteristic pattern”.

If Fermi does detect the predicted emission from the Milky Way’s smooth inner halo the Virgo team believes it might be able to see otherwise invisible clumps of dark matter lying very close to the Sun.

Professor Carlos Frenk, Director of the Institute for Computational Cosmology, at Durham University, said: “Solving the dark matter riddle will be one of the greatest scientific achievements of our time.

“The search for dark matter has dominated cosmology for many decades. It may soon come to an end.”

Professor Simon White, Director of the Max Planck Institute for Astrophysics, said: “These calculations finally allow us to ‘see’ what the dark matter distribution should look like near the Sun where we might stand a chance of detecting it.”

Dr Springel said: “This calculation has redefined the state of the art in cosmological simulations. At times I thought it would never end.”

The research was funded by the Max Planck Society, the Bavarian Computing Centre, a Royal Society Wolfson Research Merit Award and the Science and Technology Facilities Council.