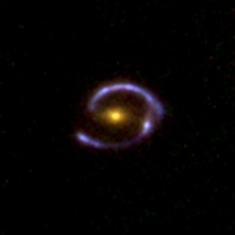 The Cosmic Eye, showing the foreground galaxy in yellow at the centre of the image surrounded by the blue arc of the distant galaxy.

A Cosmic Eye has given scientists a unique insight into galaxy formation in the very early Universe.

Using gravity from a foreground galaxy as a zoom lens the team was able to see a young star-forming galaxy in the distant Universe as it appeared only two billion years after the Big Bang.

Scientists at the California Institute of Technology (Caltech), USA, and Durham University and Cardiff University, UK, are behind the research published today (Thursday, October 9) in the prestigious scientific journal Nature.

The researchers, led by Dr Dan Stark, of Caltech, say their findings show for the first time how the distant galaxy might evolve to become a present-day system like our Milky Way.

And they say their study also provides a taste of what astronomers will be able to see in the distant Universe once projects such as the planned European Extremely Large Telescope (E-ELT) and the American Thirty Metre Telescope (TMT) come into use.

The Cosmic Eye is so called because the foreground galaxy, which is 2.2 billion light years from Earth, appears in the centre of an arc created by the distant galaxy – giving it the appearance of a human eye.

The team then used the ten metre Keck telescope, on Hawaii, which is equipped with laser-assisted guide star adaptive optics (AO) to correct for blurring in the Earth’s atmosphere, to carry out their observations.

By coupling the telescope with the magnifying effect of the gravitational field of the foreground galaxy – a technique called gravitational lensing - they were able to study the distant star system.

Gravitational lensing, the distortion of light rays by massive objects as predicted by Einstein, enlarged the distant galaxy by eight times.

This allowed the scientists to determine the galaxy’s internal velocity structure and compare it to later star systems such as the Milky Way.

Research co-author Dr Mark Swinbank, in The Institute for Computational Cosmology, at Durham University, said: “This is the most detailed study there has been of an early galaxy. Effectively we are looking back in time to when the Universe was in its very early stages.

“This technique of using gravitational lensing provides us with a glimpse of what we will commonly achieve when the next generation of telescopes, which are still a decade away, come on-line.”

Dr Dan Stark, of Caltech, said: “Gravity has effectively provided us with an additional zoom lens, enabling us to study this distant galaxy on scales approaching only a few hundred light years.

“This is ten times finer sampling than previously. As a result for the first time we can see that a typical-sized young galaxy is spinning and slowly evolving into a spiral galaxy much like our own Milky Way.”

Data from the Keck Observatory was combined with millimetre observations from the Plateau de Bure Interferometer, in the French Alps, which is sensitive to the distribution of cold gas destined to collapse to form stars.

Dr Swinbank added: “Remarkably the cold gas traced by our millimetre observations shares the rotation shown by the young stars in the Keck observations.

“The distribution of gas seen with our amazing resolution indicates we are witnessing the gradual build up of a spiral disk with a central nuclear component.”

The research was funded by a variety of bodies including the Science and Technology Facilities Council (STFC), the Royal Astronomical Society (RAS), the Royal Society and the National Science Foundation (NSF) and the Keck Foundation.

Data for the research was obtained at the WM Keck Observatory, which is operated as a scientific partnership between Caltech and NASA and from observations made with European Organisation for Astronomical Research in the Southern Hemisphere (ESO) Telescopes at the Paranal Observatory.

The scientists say the research demonstrates how important angular resolution - the angular size of the smallest detail of an astronomical object that can be distinguished with a telescope - has become in ensuring progress in extragalactic astronomy.

Projects such as the E-ELT, TMT and the Atacama Large Millimeter/submillimeter Array (ALMA), a large interferometer being completed in Chile, will aid this work.