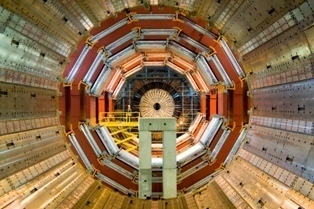 Scientists from Durham University are to examine the very beginnings of our Universe by making use of the world's biggest experiment.

Experts from the University are part of a worldwide team of scientists and engineers eagerly awaiting tomorrow's (Wednesday September 10) switch-on of the Large Hadron Collider (LHC).

The LHC is a gigantic particle accelerator built about 100m underground at CERN (the European Organisation for Nuclear Research) on the Swiss/French border at Geneva.

Tomorrow will see the first attempt to circulate a particle beam around the entire 27km of the LHC.

Scientists will eventually fire two particle beams in opposite directions around the circular construction before crashing them into each other at almost the speed of light - recreating in a very small region the conditions immediately after the Big Bang.

They hope to find answers to some of the most fundamental mysteries of our Universe, from anti-matter to dark matter, the famous Higgs particle and the possible existence of additional dimensions of space.

Durham University's Institute for Particle Physics Phenomenology (IPPP) is providing the theory and analysis behind a number of the experiments being carried out at CERN.

Whether the LHC confirms or denies leading theories, its results will mark a new era in the understanding of physics and the entire Universe.

Professor Nigel Glover, Director of the IPPP at Durham University, said: "The LHC is an international collaboration rivalling the Olympics. CERN is the world laboratory for doing research into the origins of the Universe.

"Our theoretical predictions will play a key part in interpreting the experimental data from the LHC.

"I have spent many years making predictions for the sorts of things I hope the LHC experiments will see. The LHC gives us a huge jump in energy compared to previous man-made experiments and will undoubtedly give us a fascinating new insight on how the Universe works."

The UK is one of the biggest contributors to the LHC project. Through the Science and Technology Facilities Council (STFC) which funds the UK particle physics programme, including the CERN subscription, the UK has contributed vital hardware, computing and scientific knowledge.

The Revd Dr David Wilkinson, who trained as an astrophysicist and who is a Christian theologian at Durham University, is very supportive of the project.

Dr Wilkinson, Principal of St John's College at Durham University, says: "As a Christian theologian and astrophysicist I am excited by the possibilities of the LHC at CERN.

"I am amazed by the construction of the LHC and excited by the opportunity to study in detail some of the crucial questions of the composition and early evolution of our Universe.

"It in no way worries or undermines Christian faith and I welcome the possibilities of new insights into creation.

He added: "If the LHC is successful in filling in some more of the story, whether it be the origin of mass or the nature of dark matter, we are still faced by the origin, the beauty, the universality and intelligibility of the laws of physics themselves."

Professor Keith Mason, CEO of the STFC, said "This is an historic moment in science, the culmination of decades of work.

"Scientists waiting for the LHC dare to ask the biggest questions that exist in modern science.

"Whether we discover what we expect or have our theories completely over-turned, the physics textbooks will never be the same again and the UK will have been a vital part of achieving that."

More than twenty research groups across the UK have been involved in preparing for the LHC and UK industry has won more than £270 million worth of contracts from CERN.

CERN pushes technologies in engineering, science and computing to their limits, often leading to new developments. The previous major experiment at CERN, called LEP, led to the creation of the World Wide Web.

Preparation for the LHC has already led to a number of spin-off technologies in health care, but its greatest potential technology benefit is the Grid - a whole new way of computing invented as a successor to the Web.