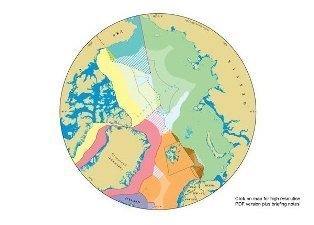 Durham University researchers have drawn the first 'Arctic Map' to show the disputed territories that states might lay claim to in the future.

The new map design follows a series of historical and ongoing arguments about ownership, and the race for resources, in the frozen lands and seas of the Arctic.

The potential for conflicts is increasing as the search for new oil, gas and minerals intensifies.

The move to comprehensively map the region illustrates the urgent need for clear policy-making on Arctic issues – an area rich in natural resources. The Durham map shows:

1/ where boundaries have been agreed

2/ where known claims are

Director of Research at the International Boundaries Research Unit (IBRU), Martin Pratt says: “The map is the most precise depiction yet of the limits and the future dividing lines that could be drawn across the Arctic region.

“The results have huge implications for policy-making as the rush to carve up the polar region continues.

“It’s a cartographic means of showing, and an attempt to collate information and predict the way in which the Arctic region may eventually be divided up. The freezing land and seas of the Arctic are likely to be getting hotter in terms of geopolitics; the Durham map aims to assist national and international policy-makers across the world.”

It’s a year since Russia planted a flag on the seabed, underneath the North Pole, highlighting its claim to a huge chunk of the Arctic.

The Russian demands relate to a complex area of law covered by the United Nations Convention on the Law of the Sea Convention (UNCLOS). Under that law, any coastal state can claim territory 200 nautical miles (nm) from their shoreline (Exclusive Economic Zone, EEZ) and exploit the natural resources within that zone. Some coastal states have rights that extend beyond EEZ due to their continental shelf. Areas of the seabed beyond the continental shelf are referred to as ‘The Area’ and any world state – landlocked or not – has equal rights in this area.

The continental shelf is the part of a country’s landmass that extends into the sea before dropping into the deep ocean. Under UNCLOS, if a state can prove its rights, it can exploit the resources of the sea and the seabed within its territory.

Russia claims that its continental shelf extends along a mountain chain running underneath the Arctic, known as the Lomonosov Ridge. Theoretically, if this was the case, Russia might be able to claim a vast area of territory.

The IBRU map shows what is currently possible and what might be permissible in terms of territorial claims under international law. It also highlights the areas of land and sea where clashes of interest are likely.

A new survey by the US Geological Survey estimates that a fifth of the world’s undiscovered, technically-recoverable resources lie within the Arctic Circle. The Lomonosov Ridge is just one area of contention between countries. Other disputes involve Canada, USA, (Greenland) Denmark, Iceland and Norway.

The problem with claims is that they must be verified by geological, geomorphological and bathymetric analysis (sub-sea surveys), and it’s not an easy or quick process to verify claims.

The new map will help politicians to understand areas of maritime jurisdiction and the methodology employed could be vital in helping to settle future sea territorial disputes.

Conservationists want laws to protect the North Pole region and climate change is likely to bring further pressure as ice melts and the seas open up to exploration.