Magic is the trick to understanding the mind 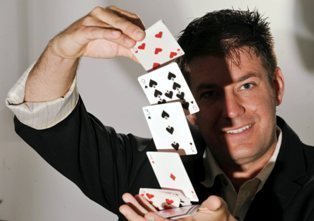 Magic tricks, like those by Derren Brown, should be studied more closely to understand how people's minds work, a new study says.

A new study concludes that elements of human cognition and perception that are not yet fully understood by scientists may receive greater insight by analysing tricks and techniques used by magicians. These techniques, which have been developed over thousands of years, offer powerful tools to manipulate our perception, according to the scientists.

The research team, from Durham University and the University of British Columbia, say the findings of their work have potential long-term applications in activities that aim to grab – and hold – people’s attention, such as human computer interfaces which are thought to become increasingly more complicated.

The study is published online in the academic journal, Trends in Cognitive Sciences. It outlines the key techniques of the magic trade – categorised as ‘misdirection, illusion and forcing’ – which have only recently been formally identified by scientists and taken seriously as a valid research area.

Although a few attempts have been made in the past to draw links between magic and human cognition, this knowledge has been largely ignored by modern psychology, say the scientists.

Report co-author and practising magician, Dr Gustav Kuhn, from Durham University’s Psychology Department, explained: “Magicians are in some ways miles ahead of scientists.

“For example, imagine a ball tossed into the air that suddenly disappears, or someone successfully predicting what you will do next.

“These tricks may seem like they defy the laws of physics and logic but they are actually created through a combination of skill and a deep knowledge of human psychology.

“By drawing upon the practical knowledge and experience of magicians, scientists may obtain new insights into various areas of human perception and cognition that we are still struggling to understand.”

To take their theory forward, Dr Kuhn and his team have developed various magic tricks and experiments to test how people’s minds work and they compare their observations with recently published scientific papers.

Dr Kuhn added a note of caution: “Magic is one of the oldest art forms in the world and relies on people’s ignorance of its methods. Although the methods we have developed are proving very useful in investigating the mind, in our dual roles as scientists and magicians, we take great care in protecting the mysteries and secrets of magic.”

Co-author Professor Ronald Rensink from the University of British Columbia said: "The effects discovered by scientists over the past few years are clearly related to the effects that magicians can produce. We are now at the point where we can begin to create a 'science of magic' that will let us understand how magic effects work, and suggest how we might further develop them and apply them in everyday life.”

The research team was supported by a Wolfson Research Fellowship from Durham University and by the Natural Sciences and Engineering Council of Canada.

In one experiment, described in Dr Kuhn’s current paper, a group of volunteers watched a video of a ‘misdirection’ trick while their eye movements were recorded with a tracking device. The magician lights a cigarette with a lighter then subtly drops both items into his lap while directing his audience’s attention to his empty right hand, making watchers believe the items have simply disappeared.

The scientists then asked the volunteers if they had detected how the trick was done. They found that the chance of volunteers seeing the items being dropped was not related to the direction in which their eyes were looking – suggesting that where they paid attention was the more important factor. These results offer a striking demonstration of how looking at an object does not necessarily mean we see it.

Dr Kuhn highlights that the observations made in this experiment are related to recent findings in vision science, which showed that only a small part of information that enters our eyes actually enters our conscious awareness.