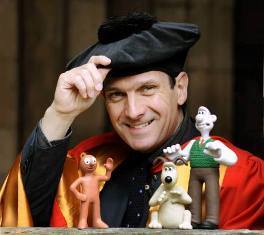 The co-founder of the animations company behind ‘Wallace and Gromit’, David Sproxton, is one of nine to be awarded an honorary degree from Durham University.

David will receive a Doctor of Letters (D.Litt).

Having graduated from Durham University in Geography 1976, David co-founded what is now one of the greatest animation houses in the industry, Aardman Animations Ltd. The company was first famous for its creation of the legendary character of Morph who went on to star in the BBC series ‘The Amazing Adventures of Morph.’

David Sproxton said: “Durham was my first choice and I remember signing up to Collingwood College because it was new and co-educational. I always knew it was unlikely I would use my degree directly in what I did, as I had my eyes firmly fixed on the film and TV business, but there's no doubt that what I learnt has stayed with me.

“It has to be said that whilst I worked hard at my degree, in the end I found myself getting involved in Durham University Theatre on the technical side. This took up considerable time. I've always had a love of light and photography and having the opportunity to light stage-shows was just too good resist. At the start of one term I found I must have got a bit of reputation because in something like six hours I'd been asked to light four shows!

“I did take in a great deal of what was thrown at me at Durham and I've found it invaluable over the years in many ways. I was very influenced by a number of my tutors, like Ian Simmons and especially Ray Hudson who had a profound effect on the way I looked at political and economic geographical issues. I still have a deep interest in the way cities develop and indeed the way transport policies are developed; stuff which might seem odd in someone who spends their time making fantasy worlds, but Ray's insights have stayed with me since those days 30 or more years ago.

“It's therefore wonderful to be given this Honorary Degree by someone who made me see the world in a different way and has influenced my thinking ever since. I'm looking forward greatly to the occasion and it will be marvellous to be re-united with people from that very formative period of my life.”

Pro Vice-Chancellor Professor Ray Hudson, who nominated David Sproxton for an honorary degree, said: “David Sproxton has had an enormous impact on popular culture. Under his dynamic and visionary leadership, Aardman has become a real global industry leader, with an international profile and glowing reputation, an example of the sort of knowledge-based cultural economy company seen by many as critical to the UK’s long-term economic prosperity. This was reflected in the thoroughly deserved award to David of a CBE in 2006 and I’m delighted that we are now awarding him an honorary doctorate.”