Why the dating game is taken at face value 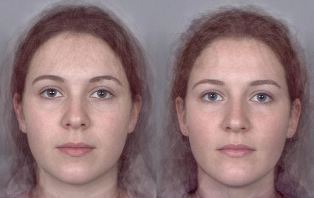 The composite image on the right is more likely to be interested in a short-term sexual relationship.

Suitors can tell a young person’s attitude to sexual relationships by their face, new research suggests.


The Durham University-led study of 700 heterosexual participants also found that young men and women look for complete opposites when it comes to relationships with the other sex.

Men generally prefer women who they perceive are open to short-term sexual relationships whilst women are usually interested in men who appear to have potential to be long-term relationship material.

The scientists say the research, which was funded by the Medical Research Council and the Economic and Social Research Council, shows people can use their perceptions to make more informed partner selection depending on the type of relationship they are pursuing. The study is a significant step in further understanding the evolution of partner choice, according to the research team from Durham, St Andrews and Aberdeen Universities.

Participants were asked to judge the attractiveness and attitudes to sex of the opposite sex from their facial photographs. These perceptual judgements were then compared with the actual attitudes and behaviours of the individuals in the photographs, which had been determined through a detailed questionnaire. The people in the photographs were all in their early 20s.

The experiments found that the men and women taking part could generally judge from photographs who would be more interested in a short-term sexual relationship. In the first study sample of 153 participants, 72 per cent of people correctly identified the attitudes from photographs more than half of the time. However, further questioning showed that the participants were not always confident in their judgements.

The research, published in Evolution and Human Behavior, also found that women who were open to short-term sexual relationships were usually seen by others as more attractive – although researchers can not determine precisely why without further investigation. The men who were most open to casual sex were generally perceived as being more masculine-looking, with facial features including squarer jaws, larger nose and smaller eyes. These findings support previous research carried out by the Durham team which found that women see masculine men as more likely to be unfaithful and as worse parents.

Lead author Dr Lynda Boothroyd from Durham University’s Psychology Department said: “Our results suggest that although some people can judge the sexual strategy of others simply from looking at their face, people are not always sure about their judgements possibly because the cues are very subtle. Yet preferences for different types of face were actually quite strong.

“This shows that these initial impressions may be part of how we assess potential mates – or potential rivals – when we first meet them. These will then give way over time to more in depth knowledge of that person, as you get to know them better, and may change with age”.

Dr Ben Jones, from the University of Aberdeen's Face Research Lab, said "Lots of previous studies have shown that people can judge a lot about a person from their face, including things like health and even some personality traits like introversion, but this really is the first study to show that people are also sensitive to subtle facial signals about the type of romantic relationships that others might enjoy."

Professor David Perrett from the University of St Andrews cautioned: “While faces do hold cues to sexual attitudes, men should not presume any kind of relationship is wanted from appearance alone since women’s choice is what matters. Indeed most women found promiscuous-looking guys unattractive for both short and long-term relationships”.

In the study, participants were shown pairs of photographs or ‘averaged’ facial images of men and women in their early 20s with two opposing attitudes to relationships. The participants were asked to choose the face that they felt would be more open to short-term sexual relationships, one-night stands and the idea of sex without love. They were also asked which face they thought was the most attractive for a long- or short-term relationship, who was more masculine or feminine, and who they thought was generally attractive.

For more information on Dr Boothroyd’s research and to take part in web-based experiments, people can log onto www.boothlab.org or www.perceptionlab.com