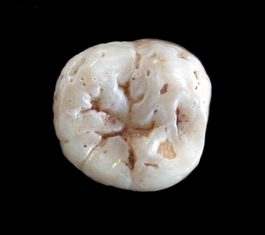 A 40,000-year-old tooth has provided the first direct proof that Neanderthals moved from place to place in their lifetimes.

In a collaborative project involving researchers from the United Kingdom, Germany and Greece, Professor Michael Richards of Durham University, UK, and his team used laser technology to collect microscopic particles of enamel from the tooth.

By analysing strontium isotope ratios in the enamel – strontium is a naturally occurring metal ingested into the body through food and water - the scientists were able to uncover geological information showing where the Neanderthal had been living when the tooth was formed.

The tooth, a third molar, was formed when the Neanderthal was aged between seven and nine.

It was recovered in a coastal limestone cave in Lakonis, in Southern Greece, during an excavation directed by Dr Eleni Panagopoulou of the Ephoreia of Paleoanthropology and Speleology (Greek Ministry of Culture). The strontium isotope readings, however, indicated that the enamel formed while the Neanderthal lived in a region made up of older volcanic bedrock.

The findings, published in the Journal of Archaeological Science, could help answer a long-standing debate about the mobility of the now extinct Neanderthal species.

Some researchers argue that Neanderthals stayed in one small area for most of their lives; others claim their movements were more substantial and they moved over long-distances; and others say they only moved within a limited area, perhaps on a seasonal basis to access different food sources.

Professor Richards said: “Strontium from ingested food and water is absorbed as if it was calcium in mammals during tooth formation.

“The evidence indicates that this Neanderthal moved over a relatively wide range of at least 20 kilometres or even further in their lifetime. Therefore we can say that Neanderthals did move over their lifetimes and were not confined to limited geographical areas.”

“Previous evidence for Neanderthal mobility comes from indirect sources such as stone tools or the presence of non-local artefacts such as sea shells at sites far away from the coast. None of these provide a direct measure of Neanderthal mobility.” said Dr Katerina Harvati of the Max Planck Institute, in Germany, who initiated the study.

The researchers believe the laser ablation technique used to collect the minute particles of enamel will allow the measurement of other rare Neanderthal remains to see how the result compares in other regions and at other time periods.

The technique could also allow scientists to look at very small scale migrations, which is not possible with traditional research methods, and could possibly be applied to research into early humans.