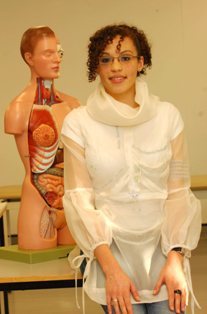 A world-first project bringing together art and science will help medical students understand what it's like to go under the knife.

A unique surgical gown, which goes on international display in the USA today, should significantly improve understanding of where operation incisions are made, and what they mean to the patient, say its developers at Durham and Ulster Universities.

It is hoped the gown, which would be worn by medical students in the classroom, will supplement the traditional plastic models of the human body that are currently in global use as teaching aids. It will also help in explaining procedures to patients, according to the scientists.

The gown has nine zips showing where surgeons make cuts in the body for various operations such as removal of the appendix and open heart surgery and its silk material is more like human tissue than the plastic of the traditional models. Medical students will wear the gown in the classroom whilst fellow students learn about surgical incisions using the zips. It will lead to a greater understanding of what it means to be the patient, say the developers.

Researchers say it will contribute to an improvement in teaching aids currently available. They say that, although the traditional plastic models can be used to show areas of the body and where incisions will roughly be made, they are not able to give medical students a sense of the feeling if they were the patient or show them the type of texture they will find once they have made an incision.

Leading medical developer Professor John McLachlan, Associate Dean in Durham University’s School for Health, explains: “Current anatomical teaching aids describe but they don’t evoke. They take no account of emotional involvement or the feel of the body. The way medical students distance themselves emotionally from the patient’s body has long been seen as a desirable outcome of current modes of medical training.

“But this ‘desensitation’ also brings with it the risk of objectifying the body. The patient becomes ‘the liver in bed four’ rather than Mrs Smith. We think we can use art to bring meaning back into medical teaching and we want to help students understand the significance of the body as well as its structure.”

The garment, named ‘Incisions’, was funded by the Wellcome Trust as part of a wider project to explore teaching, learning and thinking about the body through a series of art works and artefacts. ‘Incisions’ has been selected for inclusion in two major international exhibitions with the first one at the Museum of Science in Boston, USA opening today (30 January).

Artistic lead, Karen Fleming, Reader at Ulster University, said: “The body and garments are common objects in art and design but collaboration with medical knowledge brings a new dimension. The challenge for us has been finding material metaphors for living matter that were aesthetically inviting rather than repulsive. We have combined some of the familiar features from hospital gowns with fashion detailing to make it appealing”

The research team aims to feed the use of the gown into medical schools around the UK and beyond. It could form an integral part of the Personal and Professional Development strand of medical training in which students develop the ability to communicate effectively and sensitively with their patients.