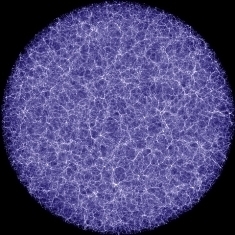 Cosmologists have run a series of computer simulations of the Universe that could ultimately help solve the mystery of dark energy.

Results of the simulations, carried out by Durham University’s world-leading Institute for Computational Cosmology (ICC), tell researchers how to measure dark energy – a repulsive force that counteracts gravity.

The findings, published today (Friday, January 11) in the Monthly Notices of the Royal Astronomical Society, will also provide vital input into the design of a proposed satellite mission called SPACE – the SPectroscopic All-sky Cosmic Explorer - that could unveil the nature of dark energy.

The discovery of dark energy in 1998 was completely unexpected and understanding its nature is one of the biggest problems in physics.

Scientists believe dark energy, which makes up 70 per cent of the Universe, is driving its accelerating expansion. If this expansion continues to accelerate experts say it could eventually lead to a Big Freeze as the Universe is pulled apart and becomes a vast cold expanse of dying stars and black holes.

The simulations, which took 11 days to run on Durham’s unique Cosmology Machine (COSMA) computer, looked at tiny ripples in the distribution of matter in the Universe made by sound waves a few hundred thousand years after the Big Bang.

The ripples are delicate and some have been destroyed over the subsequent 13 billion years of the Universe, but the simulations showed they survived in certain conditions.

By changing the nature of dark energy in the simulations, the researchers discovered that the ripples appeared to change in length and could act as a “standard ruler” in the measurement of dark energy.

ICC Director Professor Carlos Frenk said: “The ripples are a ‘gold standard’. By comparing the size of the measured ripples to the gold standard we can work out how the Universe has expanded and from this figure out the properties of the dark energy.

“Astronomers are stuck with the one universe we live in. However, the simulations allow us to experiment with what might have happened if there had been more or less dark energy in the universe.”

In the next five to 10 years a number of experiments are planned to explore dark energy. The Durham simulation has demonstrated the feasibility of the SPACE satellite mission proposed to the European Space Agency’s (ESA) Cosmic Vision programme.

The project has been put forward by an international consortium of researchers including the Durham team.

SPACE, which is led by Bologna University, in Italy, is through to the next round of assessment by the ESA and if successful is planned to launch in 2017.

Co-principal investigator Professor Andrea Cimatti, of Bologna University, said: “Thanks to the ICC simulations it is possible to predict what SPACE would observe and to plan how to develop the mission parameters in order to obtain a three-dimensional map of the Universe and to compare it with the predictions of the simulations.

“Thanks to this comparison it will be possible to unveil the nature of dark energy and to understand how the structures in the Universe built up and evolved with cosmic time.”