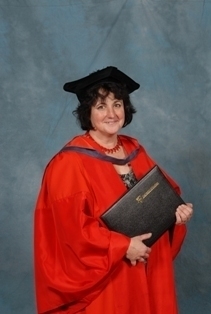 Renowned BBC horticulturalist and Durham University graduate, Pippa Greenwood, has been made an honorary Doctor of Science.

Pippa read for a degree in Botany at Durham, where she was a member of Trevelyan College, itself playing host to her degree ceremony. Pippa was the first Durham University undergraduate to join the Friends of the Botanic Garden organization in the early 1980s and as part of her return to Durham her family was taken on a guided tour to see how it has developed.

Pippa said: “When I was here as an undergraduate I had a fantastic time, and so to be invited back to receive an honorary degree is of immense importance to me. I am truly honoured and this award has made my year.”

Professor Chris Higgins, Vice-Chancellor of Durham University, commented: “As a Durham botanist myself, it is with particular pleasure that I have awarded Pippa her honorary degree. She is a brilliant example of someone who brings science to a wider audience. It is appropriate in our 175th Anniversary year that we recognise the contribution of alumni such as Pippa to greater public understanding of science, and particularly the increasing interest the public shows in all matters green and environmental.”

Dr Phil Gates, also well-known to BBC Radio 4 listeners and a Senior Lecturer in the School of Biological and Biomedical Sciences, said: “Pippa is an outstanding example of a scientist who has combined her scientific training with high-level communication skills to inform and entertain the public. Her encyclopedic knowledge of plant pests and diseases is matched by her practical skills and she has been a strong advocate of wildlife gardening and organic horticulture.”

Durham University’s Botanic Garden has been on its current site since 1970. It was created primarily for teaching and research. As the garden matured, a visitor centre was built, opened in 1988 by Dame Margot Fonteyn, the Chancellor of the University at the time, to accommodate the 6000 annual visitors. The garden now attracts over 80,000 visitors annually, including regular meetings of the Durham City Wildlife Watch Group, the wildlife and environmental club for youngsters and their families.

Steve Ansdell, Horticultural Manager said: “The Botanic Garden is not only appreciated by University staff and students but by the whole community. We regularly welcome tourists, local families and children. We were delighted to show Pippa how we have changed and grown since her time as a student.”