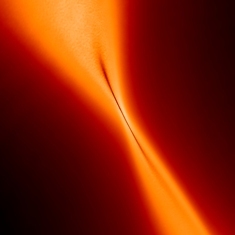 A groundbreaking study has provided new insight into the way the first stars were formed at the start of the Universe, some 13 billion years ago.

Cosmologists from Durham University, publishing their results in the prestigious international academic journal, Science, suggest that the formation of the first stars depends crucially on the nature of the ‘dark matter’, the strange material that makes up most of the mass in the universe.

The discovery takes scientists a step further to determining the nature of dark matter, which remains a mystery since it was first discovered more than 70 years ago. It also suggests that some of the very first stars that ever formed can still be found in the Milky Way galaxy today.

After the Big Bang, the universe was mostly ‘smooth’, with just small ripples in the matter density. These ripples grew larger due to the gravitational forces acting on the dark matter particles contained in them. Eventually, gas was pulled into the forming structures, leading to the formation of the very first stars, about 100 million years after the Big Bang.

For their research, the team from Durham University’s Institute for Computational Cosmology carried out sophisticated computer simulations of the formation of these early stars with accepted scientific models of so-called ‘cold’ as well as ‘warm’ dark matter.

In contrast, for faster-moving ‘warm dark matter’, a large number of stars of differing sizes formed at the same time in a big burst of star formation. The bursts occurred in long and thin filaments.

One of the researchers, Dr Liang Gao, who receives funding from the UK’s Science and Technology Facilities Council, said: “These filaments would have been around 9000 light years long, which is about a quarter of the size of the Milky Way galaxy today. The very luminous star burst would have lit-up the dark universe in spectacular fashion.”

The research paves the way for observational studies which could bring scientists closer to finding out more about the nature of dark matter. Co-researcher, Dr Tom Theuns, said: “A key question that astronomers often ask is ‘where are the descendants of the first stars today?’ The answer is that, if the dark matter is warm, some of these primordial stars should be lurking around our galaxy.”

The Durham University scientists also give new insights into the way that black holes could be formed. Most galaxies harbour in their centres monster black holes, some with masses more than a billion times the mass of the sun.
The team hypothesises that collisions between stars in the dense filament in the warm dark matter scenario lead to the formation of the seeds for such black holes.

Dr Theuns added: “Our results raise the exciting prospect of learning about the nature of dark matter from studying the oldest stars. Another tell-tale sign could be the gigantic black holes that live in centres of galaxies like the Milky Way. They could have formed during the collapse of the first filaments in a universe dominated by warm dark matter.”

* In the authors' simulations, a gas filament condenses and then fragments to form the first stars. The gas heats as it gets compressed but then becomes cold in the center. The red shading in the image above reflects changes in the gas' temperature. [Image © Science]