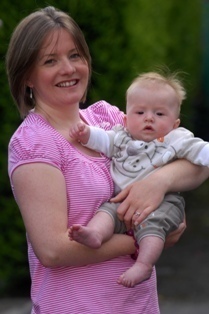 Mothers who cradle their baby to their right-hand side are displaying signs of extreme stress, a new study shows.

Although most mums feel stressed in the early stages of their baby’s life, the study by Durham University researchers suggests their baby cradling habits are a key indicator of whether this stress could become overwhelming and lead to depression.

Previous research has already shown that the majority of mothers prefer to cradle their baby to their left regardless of whether they are left or right handed.

As at least one in ten women develop post-natal depression, studying non-verbal cues such as baby cradling could potentially help doctors and health visitors identify which mothers are in need of extra professional support before it gets too late.

Experts say that stress in mums can lead to depression which can have a detrimental effect on their baby’s mental development and wellbeing.

The study, published in the on-line version of the Journal of Child Psychology and Psychiatry, studied 79 new mothers and their babies, who were an average age of seven months.

In their own homes, mothers were asked to pick up their babies and cradle them in their arm. They also completed a survey which quizzed them on their mental state. The research methodology established there was no link between cradling side and left or right handedness.

The study found that of the mothers who expressed no signs of stress or depression in the survey, 86 per cent preferred to hold their babies to the left. However, cradling babies to the right was more prominent amongst stressed mums with 32 per cent showing a right-sided bias.

Lead author Dr Nadja Reissland, a senior lecturer with Durham University’s Department of Psychology, explained why early detection of stress is vital: “Many mothers don’t realise they are suffering from stress, or don’t want to admit they are. The way they interact with their child is usually the best indicator of their inner mental state.

“Mums who are stressed often see what their baby does as negative so they may interpret their baby’s crying as being naughty, when in fact this is normal behaviour. They may even feel the baby is stopping them from living the life they really want to live.

“These sorts of feelings can have a huge impact on the relationship between mother and baby and on the family as a whole. If this stress develops into depression, then the situation can be even worse.”

The research team is following up this pilot study with another study looking at cradling side in a before and after situation with mothers taking their babies for their first vaccinations.

The study was funded by the Children’s Research Fund.

Rachelle, who is 29 years old and from Highwood View in Durham City, has an eight-month old baby boy called Sam whom she cradles to her left. Despite feeling some stress as a first-time mum, Rachelle has not felt her stress levels getting out of control.

Rachelle, who works in news production, said: “I did feel a bit stressed when Sam was first born as he was slow in putting on weight, but fortunately that was just a temporary worry and it passed.

“I know a lot of mums do go through the same stresses but when it gets to a point where someone really can’t cope, I think it’s a good thing that there could be another sign that indicates someone may need help.”