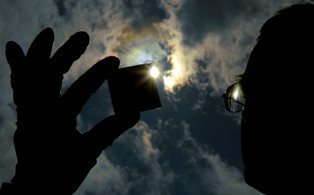 The experts at Durham University are developing light-absorbing materials for use in the production of thin-layer solar photovoltaic (PV) cells which are used to convert light energy into electricity.

The four-year project involves experiments on a range of different materials that would be less expensive and more sustainable to use in the manufacturing of solar panels.

Right now the project is entering a new phase for the development of cheaper and more sustainable variants of these materials.

The Durham team is also working on manipulating the growth of the materials so they form a continuous structure which is essential for conducting the energy trapped by solar panels before it is turned into usable electricity. This will help improve the efficiency of the thin-layer PV cells.

It’s hoped that the development of more affordable thin-film PV cells could lead to a reduction in the cost of solar panels for the domestic market and an increase in the use of solar power.

Solar power currently provides less than one hundredth of one percent of the UK’s home energy needs.

The thin-layer PV cells would be used to make solar panels that could be fitted to roofs to help power homes with any surplus electricity being fed back to The National Grid.

This could lead to cheaper fuel bills and less reliance on burning fossil fuels as a way of helping to generate electricity.

Professor Ken Durose, Director of the Durham Centre for Renewable Energy, who is leading the research, said: “One of the main issues in solar energy is the cost of materials and we recognise that the cost of solar cells is slowing down their uptake.

“If solar panels were cheap enough so you could buy a system off the shelf that provided even a fraction of your power needs you would do it, but that product isn’t there at the moment.

“The key indicator of cost effectiveness is how many pounds do you have to spend to get a watt of power out?

“If you can make solar panels more cheaply then you will have a winning product.”

To aid its research the university has taken delivery of a £1.7 million suite of high powered electron microscopes, funded by the Science Research Investment Fund, which have nano-scale resolution allowing scientists to see the effects that currently limit the performance of solar cells.

One of the microscopes is the first of its kind in the UK and Professor Durose said: “This instrument will put the North East right out in front.

“We are working on new ideas in renewable energy and this opens up tremendous opportunities in research.”

Durham, Newcastle and Northumbria universities, The New and Renewable Energy Centre (NaREC), in Blyth, and the Centre for Process Innovation (CPI), in Wilton, have formed a consortium to bid to host the Energy Technologies Institute (ETI) in the North East.

The Consortium bidding to host the Energy technologies Institute (ETI) in NorthEast England, has been named as one of three short-listed finalists to host the headquarters of this national centre, which will be responsible for the allocation of approximately £1bn of private and public research funds into renewable and low carbon energy.

The North East Consortium will now face competition from Scotland and the Midlands, at a final selection presentation in London on September 6th. Made up of representatives from industry sponsors and Government, the selection panel will then make their recommendation to the ETI board, with the host location to be formally announced in early October.

Mark Pearson Energy and Process Innovation Manager at One NorthEast, a member of the ETI bid team commented: “This announcement by Durham University highlights the strength in depth we have in energy research and development in the North East, and the opportunities and change this can generate in our regional economy and built environment.

“Our bid to host the ETI recognises our capability across the region to make this initiative a success for the UK.”