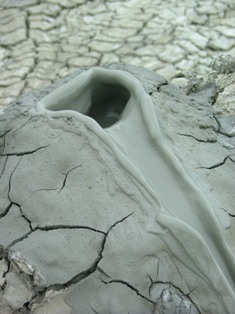 The first scientific report into the causes and impact of Lusi, the Indonesian mud volcano, reveals that the 2006 eruption will continue to erupt and spew out between 7,000 and 150,000 cubic metres of mud a day for months, if not years to come, leaving at least 10 km2 around the volcano vent uninhabitable for years and over 11,000 people permanently displaced.

The paper by a Durham University-led team and published in the February issue of US journal, GSA Today , reveals that the eruption was almost certainly manmade and caused by the drilling of a nearby exploratory borehole looking for gas, reinforcing the possible explanation in a UN report from July last year.

The mud volcano, known locally as ‘Lusi’, has been erupting for 239 days and has continued to spew between 7,000 and 150,000 cubic metres of mud out every day, destroying infrastructure, razing four villages and 25 factories. Thirteen people have also died as a result of a rupture in a natural gas pipeline that lay underneath one of the holding dams built to retain the mud. It first erupted on 29 May 2006 in the Porong subdistrict of Sidoarjo in Eastern Java, close to Indonesia’s second city of Surabaya.

The team of mud volcano and pressure experts, who analysed satellite images of the area for their study, propose that a local region around the central volcano vent will collapse to form a crater. In addition an area of at least the dimensions of the flow (10km2) will probably sag over the next few months and years.

Seepage of mud and water are common on earth but usually a preventable hazard when exploring for oil and gas.

Mud volcano expert, Professor Richard Davies of Durham University’s Centre for Research into Earth Energy Systems (CeREES) comments: “It is standard industry procedure that this kind of drilling requires the use of steel casing to support the borehole, to protect against the pressure of fluids such as water, oil or gas. In the case of Lusi a pressured limestone rock containing water (a water aquifer) was drilled while the lower part of the borehole was exposed and not protected by casing. As a result rocks fractured and a mix of mud and water worked its way to the surface. Our research brings us to the conclusion that the incident was most probably the result of drilling.”

“Lusi is similar to a ‘blow-out’ (eruption of water at the surface) that happened offshore of Brunei in 1979. Just as is most probably the case with Lusi, the Brunei event was caused by drilling and it took an international oil company almost 30 years and 20 relief wells and monitoring before the eruption stopped.”

Prof. Davies continued: “Up to now scientists have known relatively little about mud volcanoes and Lusi has provided the first opportunity for experts to study one from birth onwards. Our work offers a clearer understanding of how they are created and what happens when they erupt. We hope that the new insights will prove useful to the oil and gas industry, which frequently encounters pressurised fluid in rock strata that could, if not controlled, force their way to the surface during exploration drilling. Ultimately we hope that what we learn about this incident can help insure it is less likely to happen again.”

The team from Durham, Cardiff and Aberdeen Universities and GeoPressure Technology Ltd, an Ikon Science company, has essentially discounted the effect of an earthquake which occurred in the region two days prior to the mud volcano as the cause of the eruption. This is based on the time-lapse between the earthquake and the eruption, the fact that there were no other mud volcanoes in the region following the earthquake and through comparison with other geological examples.