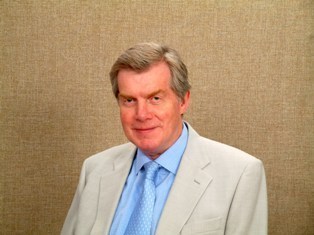 The Max Born Medal is a collaborative prize awarded by both the Institute of Physics and the German Physical Society and is among the annual IoP honours list for physicists who have made outstanding contributions to the subject. The award was instituted in 1972 and is intended to commemorate the physicist Max Born, a German/British physicist who was awarded the Nobel Prize in Physics in 1954 for his fundamental research in quantum mechanics, and to cement the relationship between the two institutions. The award is made alternately by the Councils of one of the two societies to a physicist selected from a list of nominees submitted by the other.

Physics is the science concerned with the discovery and understanding of the fundamental laws which govern matter, energy, space and time and it is central to our understanding of the composition and origin of the Universe. It underpins many of the technological advances of modern society.

Professor Martin was awarded the Max Born medal for his pioneering research in the understanding of the strong interaction, in particular his theoretical work on the internal structure of the proton. One result of this research is that the particle theory group at Durham, which in 2000 developed into the Institute for Particle Physics Phenomenology (IPPP), has become, inter alia, the world centre for determining the partonic structure of the proton. These so-called MRST parton distributions which are essential ingredients in interpreting the measurements made at all high energy proton accelerators at particle physics accelerator laboratories around the world, including the Large Hadron Collider (LHC) about to be commissioned at CERN in Geneva. MRST stands for (Alan) Martin, (Dick) Roberts, (James) Stirling and (Robert) Thorne. The German connection, on which the prize is also based, comes through the Hadron Electron Ring Accelerator (HERA) operating at DESY in Hamburg. The measurements made there are crucial input for the MRST analyses.

Professor Martin has also pursued research, which has made a major impact on the HERA experimental programme, with a number of other international physicists, who came to Durham as Visiting Professors. One such collaboration, with the late Jan Kwiecinski (from Krakow), into "small x" physics, led to the introduction of a joint Durham-Krakow Ph.D. degree, which was awarded to several of their students.

When Professor Martin was told of his prize he said, “I feel extremely honoured to have been awarded the Max Born Medal and Prize and I gratefully accept it on behalf of all my research collaborators who have helped this prize come to the IPPP in Durham.”

Durham is one of the leading physics and astronomy departments in the UK. In addition to its strong body of undergraduate teaching of degrees in Physics, Physics & Astronomy and Theoretical Physics, the Department also incorporates the Ogden Centre for Fundamental Physics, home to the Institute for Particle Physics Phenomenology and to the Institute for Computational Cosmology.
The Ogden Centre is also the base for the department’s innovative outreach programme for school children and their teachers.