Furthering the exploration of space 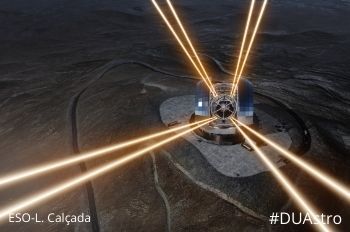 Our experts are working on the European Extremely Large Telescope. Credit ESO-L. Calçada.

Durham’s researchers are helping to build some of the world’s most powerful new telescopes to further our exploration of space.

Our astronomers and cosmologists are also involved major international projects that will hunt two of the universe’s most mysterious ingredients – dark matter and dark energy – and investigate how the universe formed.

Our astronomers will use the JWST to hunt for dark matter and investigate early galaxy formation.

We’re involved in the development of the HARMONI instrument for the new European Extremely Large Telescope (E ELT) currently under construction in the Atacama Desert in Chile.

HARMONI will help astronomers identify the gases and metals in stars and galaxies, measure how fast stars are moving towards or away from us, and characterise the atmospheres of planets orbiting distant stars.

We’re part of the international team behind LOFAR, the world’s largest radio telescope that operates at low frequencies.

And we have scientific input into the new Square Kilometre Array (SKA) Observatory which will become the largest radio telescope on Earth when it’s assembled over the next ten years.

We’ve also played a key role in development and use of the Dark Energy Spectroscopic Instrument (DESI), which will map the distance to 35 million galaxies and 2.4 million quasars.

Scientists will use DESI to seek to measure the properties of dark energy, believed to be one of the drivers behind the universe’s expansion

And we’re involved in the EUCLID survey that will look back over ten billion years, covering the entire period when scientists say dark energy played a significant role in the universe’s expansion.