Durham among first to use Hubble successor 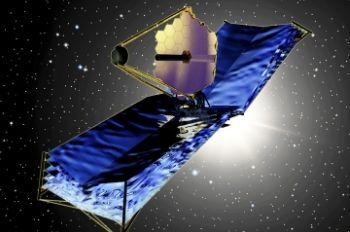 Durham's astronomers will be some of the first to use the new James Webb Space Telescope.

Durham’s astronomers are playing a key role in the biggest scientific programme to be carried out on the new successor to the Hubble Space Telescope.

Our scientists will use NASA’s James Webb Space Telescope (JWST) to hunt for dark matter and investigate early galaxy formation.

The JWST is the largest, most powerful space telescope ever built and is scheduled for launch in October 2021 before beginning operations in 2022.

Parts for the new telescope were built by our Centre for Advanced Instrumentation.

Our astronomers are part of the global COSMOS-Webb programme, the biggest General Observer programme selected for the JWST’s first year of operation.

COSMOS-Webb will survey a patch of sky near the constellation Sextans and, thanks to the JWST’s increased resolution, our astronomers expect to see half-a-million distant galaxies.

Together with researchers at NASA’s Jet Propulsion Laboratory, we will lead work to map the scaffolding of dark matter that surrounds these galaxies and has shaped their evolution.

Most of the universe’s matter is dark and completely different from the matter that makes up stars, planets and people.

It’s thought that galaxies formed and grew when gas cooled and condensed at the centre of enormous clumps of dark matter - but what this substance might be remains a mystery.

We’re also part of an international team that will combine the JWST’s high resolution with gravitational lensing – using the gravitational effect of a foreground galaxy to magnify those further away – to look at one of the most distant known galaxies called MACS0647-JD.

The Hubble Space Telescope spotted this galaxy forming stars at an astonishingly fast rate, very early in the life of the universe.

At a time when almost everything in the universe was dark matter or hydrogen, these stars “manufactured” the first heavy elements like carbon, nitrogen and oxygen.

We’ll be studying these elements to understand the early phases of galaxy formation at the beginning of the universe and how its stars produced these first heavy elements.