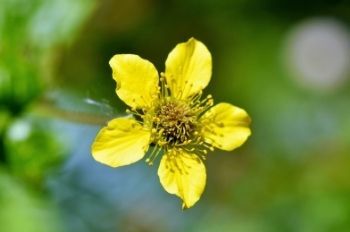 In this article, Dr Robert Baxter from our Department of Biosciences comments on how unique alpine plants are adapting to thrive in new areas of bare ground in front of retreating glaciers. He explains that with continued warming threatening the extinction of some glaciers, the rare alpine plants are forced higher and higher up the mountain and eventually left with nowhere to grow.

High up on a mountain where winds are too fierce, temperatures too extreme and soils too poor for trees, some of the most unusual plants on Earth grow. In this harsh alpine zone where shade is scarce, species such as the houseleek have evolved to withstand the punishing ultraviolet radiation by being able to quickly repair their DNA.

Cushion plants, which resemble pin cushions dropped on the ground, grow so close to the soil that they effectively huddle for shelter from the sheer, drying winds overhead. This helps species like vernal sandwort and mossy saxifrage trap dead plant matter blown along the ground – a welcome supply of compost and moisture amid the dry and barren landscape.

These characteristics make some alpine plants very good pioneers – they can arrive on bare ground and begin changing it so that it becomes more suitable for other species. But as the global climate changes, mountain ranges are warming fast. Despite its hardy reputation, the unique flora of these regions faces an uncertain future.

In a new study published in Frontiers in Ecology and Evolution, researchers found that one-fifth of alpine plant species on four glaciers in the Italian Alps are likely to become locally extinct once the glaciers vanish from the high mountains. Some of these European species are plants which are found nowhere else on Earth.

In Valmalenco in the Italian Alps, the Ventina glacier is receding by about 30 metres a year. As it retreats, the glacier unveils bare ground which, in many places, has been covered by ice for thousands of years. In the past, glaciers have advanced with cooler temperatures and greater snowfall, and retreated in warmer and less snowy periods. Scientists have long studied the sequence of colonisation of bare ground by plants as time passes from the glacier’s retreat, often over many centuries.

This is a process similar to what many readers will have observed on bare ground prepared for planting in a garden. If the ground is left even for a short period, opportunistic weedy species quickly establish themselves. Left for longer, a whole community of different plants develops. New arrivals grow and shade the early colonisers, stabilise the ground and help trap moisture, changing conditions so that pickier plants can put down roots.

New areas of bare ground in front of retreating glaciers are where many unique alpine plants are adapted to thrive. But with continued warming threatening the extinction of some glaciers, halting the uncovering of new bare ground year upon year, the rare alpine colonisers are forced higher and higher up the mountain and eventually left with nowhere to grow.

In the constant battle for space, light, water and nutrients, there are inevitably winners and losers. Pioneer species are specialised for doing well in open habitats, but the conditions these specialists help create are exploited by more competitive species which eventually push them out. These generalist competitors are more likely to flourish in the long term as glaciers vanish. They represent 29% of alpine species and include alpine meadow-grass and dwarf yellow cinquefoil.

Without glaciers exposing new bare ground, not only are pioneer species lost, but the process they help start is affected. The very warming that is causing glaciers to retreat is also forcing plants from lower altitudes upwards into the alpine zone, adding to the pressure on existing alpine specialists and ultimately favouring fewer, more competitive plants.

What will happen with these new communities of plants is unclear. But plants support a wider community of species, including pollinating insects, grazing animals and soil microbes that stitch together alpine ecosystems. Losing certain plant species and reducing the mountain’s overall biodiversity will have consequences stretching far beyond the plants themselves.

Slowing the rate of global warming would probably slow the rate at which the world’s glaciers are retreating. But for many dependent alpine species, it may already be too late.