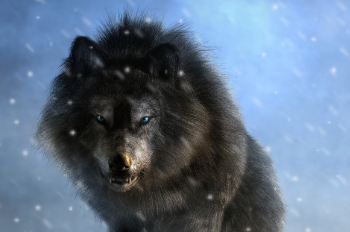 For fans of the TV show Game of Thrones, dire wolves are often seen as mysterious iconic legends.

Now, for the first time, an international team led by Durham University and colleagues in Australia, Germany and the US, have analysed ancient DNA from dire wolves to reveal a complex history of these ice age predators.

The study shows that extinct dire wolves split off from other wolves nearly six million years ago and were only a distant relative of today’s wolves.

Dire wolves, made famous in the TV show Game of Thrones, were common across North America until around 13,000 years ago, after which they went extinct. However, lots of mysteries still surround their evolution and extinction.

The international team of 49 researchers from nine countries sequenced the ancient DNA of five dire wolf sub-fossils from Wyoming, Idaho, Ohio, and Tennessee, dating back to over 50,000 years ago as well as those of many different wolf-like canid species.

Their analyses suggest that unlike many canid species which apparently migrated repeatedly between North America and Eurasia over time, dire wolves evolved solely in North America for millions of years.

Although dire wolves overlapped with coyotes and grey wolves in North America for at least 10,000 years before their extinction, the researchers found no evidence that they interbred with these species. They suggest that their deep evolutionary differences meant that they were likely ill equipped to adapt to changing conditions at the end of the ice age.

The dire wolf is one of the most famous prehistoric carnivores from Pleistocene America. Known scientifically as Canis dirus, meaning ’fearsome dog’, they preyed on large mammals like bison.

Even though dire wolves became extinct a long time ago, thanks to fossil remains, DNA analysis and a little bit of help from Game of Thrones, their legend lives on.