How French words became part of the English language 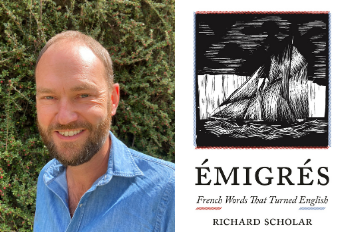 We may not realise it, but many of us speak more French than we think.

French words have gradually become part of the English language over the centuries and their origins go as far back as the Norman conquest of England in 1066.

A new book by Professor Richard Scholar explores some of the French words and phrases we commonly use and asks why and how they became and remain part of our vocabulary.

In his book – Émigrés: French Words That Turned English – Richard shows how the reign of Charles II in the 17th century played a major part in this history.

Our fondness of French words, such as ennui, caprice, and je ne sais quoi, stems, in large part, from the French-inspired court of King Charles II, who had a close alliance with his cousin, King Louis XIV of France.

In addition, wealthy British people began to travel more extensively with their servants, so they learnt foreign words and languages and brought them back to England.

Richard also suggests that the reports of the ‘triumph of English’ - as a global common language - have been exaggerated.

Richard highlights the challenge that our use of French words presents to widely held attitudes in Britain towards other languages and cultures.

In an increasingly global world and one that will undoubtedly be shaped by the impact of Covid-19 and post-Brexit, Richard adds this is an opportune time to reconsider those attitudes.

He goes on to say that, to make our way in the new normal, we should redouble our efforts to learn other languages so we can listen to what people have to tell us in their own words.

Richard is appearing at the virtual Durham Book Festival this Saturday (17 October) as part of the ‘New Ideas for the New Normal’ series of newly commissioned video essays from our leading researchers and academics.

During his ten–minute piece, ‘The Multilingual Pleasures of English’, Richard will consider how our lives might look in a post-pandemic world.

Perhaps, Richard suggests, there is no better place to start rethinking our place in that world than our attitudes towards languages.