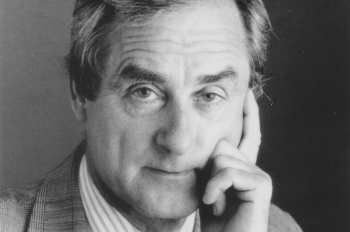 "Our community is devastated to learn of the loss of alumnus Sir Harold Evans - a journalistic pioneer whose exceptional career spanned decades and whose legacy will influence generations to come.

“Sir Harry is a deep loss to us all and will be remembered fondly here by so many of our staff, students, and alumni alike. Our thoughts and best wishes are with his family.”

Professor Stuart Corbridge paid the above tribute to the late Sir Harold Evans this morning.

Sir Harold was a former student of University College, Durham, where he read Politics and Economics, graduating with honours in 1952 after completing national service with the Royal Air Force.

Born in Eccles and raised in Manchester, at the age of sixteen Harold left school and began working for The Reporter in Ashton-Under-Lyne. Going into journalism, he saw how important it was to study at university.

As a student here at Durham, he nurtured this passion, starting as a contributor and later editor of Palatinate, the University’s student publication.

Sir Harold often spoke of his formative experiences at Durham. On a 2012 visit back to Durham to give a lecture for Students, he commented:

“Durham was crucial for me… You would sit at dinner next to a Physician, a Musician, people from other subject areas and talk. There was a collision of all different disciplines. By talking you were already better educated.”

In 1998, he received an honorary doctorate from the University in recognition of his trailblazing journalistic and editorial career. Having edited the Northern Echo, the Sunday Times, and later becoming Editor-at-Large at Reuters, Sir Harry had also become a noted author, highly-respected interviewer and commentator, and mentor to many senior leaders in his field.

Evans was named one of the top 50 World Press Freedom Heroes by the International Press Institute in 2000 and received his KBE in 2004.

"Our University College community is deeply sad to learn of Sir Harry’s passing. He was a proud Castleman with a highly distinguished career. He was a beacon of professionalism, integrity and advocacy many of our students continue to study and celebrate today; his legacy will be felt by generations to come. All of us here at Castle hold Sir Harry's family in our hearts and prayers during this sad time."

"Whenever we talk about Palatinate alumni, Sir Harold Evans’s name comes up. As students, to know that we are starting out in the same publication that such an important figure in journalism once did is inspiring. His contribution to journalism was remarkable and he will be much missed - we will always be proud to count him among former Palatinate editors."