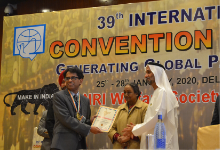 This week, Professor of Macroeconomics Parantap Basu was given the prestigious Hind Rattan (a Hindi title meaning ‘Jewel of India’) Award for 2020.

The award recognises Parantap’s “outstanding services, contribution and achievement” in the field of economics, particularly his research on Indian macro economy. The NRI Welfare Society of India under the auspices of the Government of India gave the award, which is one of the highest awards given to non-resident persons of Indian origin.

Parantap said: “It is a prestigious award and I feel very honoured to be selected from the large Indian diaspora. Collecting the award was an experience I will not forget.”

Parantap’s published research includes work in various fields of macroeconomics such as macro-finance, growth and development and business cycle theory. A recent paper in the Economic Inquiry looked into why monetary transmission in India is weak.

The award was presented at the 39th convention of the NRI Welfare Society in New Delhi on 25 January. The ceremony took place at the Pravasi Bharatiya Kendra of the Ministry of External Affairs, Government of India on the eve of the Indian Republic Day. Senior members of the Government and Supreme Court, international ambassadors and other dignitaries were invited to attend. The medal was given by Smt Meira Kumar, former union minister and the 15th speaker of the Lok Sabha (Lower House of the Indian Parliament), and the certificate presented by H.E Dr Ahmed bin Mohammed Al-Jarwan, the President of the Global Council for Tolerance and Peace, UAE.