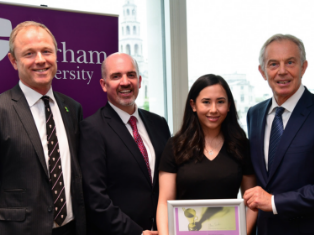 We are launching the new prize to honour the memory of our former colleague, Leo Blair, father of Tony Blair. Leo Blair taught criminal law for many years at Durham, helping to kindle a passion for advocacy amongst our students and has inspired many to pursue successful careers in law. This prize helps raise the profile of advocacy, one of the most important skills young lawyers can master.

Since stepping down as Prime Minister in 2007, Tony Blair has served as an international diplomat and pursued a range of charitable interests. In 2009, he launched the Faith and Globalisation Initiative, involving Durham and Yale University, USA. He continues to be active in politics, including through the Tony Blair Institute for Global Change. He also leads work to encourage children in North East England to take up sport and people of different faiths to come together in promoting respect and understanding.

Tony Blair said: “I’m delighted to see the Law School thriving and I can’t tell you how proud my father would be to have this award named after him. Durham played a huge part in our lives. I am absolutely thrilled Mia will be the first winner of this prize”.

Our Law School is internationally recognised as a leader in legal education and research. It was ranked in the World Top 40 Law Schools in the QS World Rankings. The ground-breaking research from the school was ranked the third best in the UK’s last national Research Excellence Framework in 2014. Alumni of the school include current members of the UK Supreme Court, the Court of Appeal, and Members of Parliament.

To watch Tony’s Blair’s presentation of the prize, see here

Information on other awards and prizes available to Law students throughout their studies can be found here.