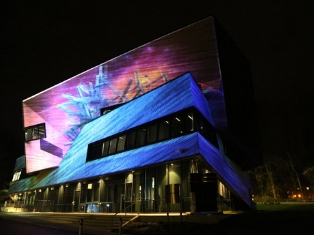 We’re excited to announce that we’re going to be a major partner of the tenth anniversary edition of Lumiere, when the UK’s biggest light festival returns to Durham in November 2019.

We think we have much in common with Lumiere. It’s inspiring, innovative, and exciting. It brings many visitors to Durham, makes a significant contribution to the economy, and helps raise the profile of our City and region nationally and internationally. So we’re very proud to be a major partner.

Lumiere Durham has become a landmark event in the cultural calendar of North East England and is recognised around the world as a “must-see” on the international light festival circuit.

Lumiere will return to illuminate Durham for a spectacular tenth anniversary edition from Thursday 14 – Sunday 17 November, 2019. Produced by arts charity Artichoke and commissioned by Durham County Council, with additional support from Arts Council England, ourselves and a host of other funders and supporters, the four-day festival will feature around 30 bespoke installations from internationally acclaimed artists.

We’ve supported Lumiere since it began in 2009. In 2017, we hosted several major installations. Cosmic Architecture was a light and sound installation featuring our Ogden Centre for Fundamental Physics, inspired by the world-leading cosmology and astronomy research that takes place in the Daniel Libeskind-designed building.

For the Birdstook visitors on a meditative and immersive journey through our Botanic Garden, with over 20 light and sound installations inspired by birds.

For 2019, we’re making a major cash contribution and we’re a major partner across cultural activity, volunteering and logistics.

How can I get involved?

Lumiere Durham 2019 will run from Thursday 14 – Sunday 17 November. It will be free to attend. Further details will be announced nearer the time. In the meantime, please visit the Lumiere website, where you can read more and sign up to receive updates.