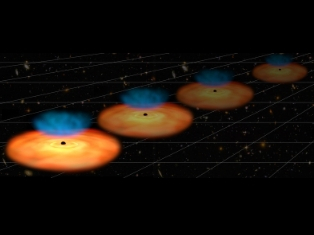 Scientists are using supermassive black holes to measure the expansion of the early Universe.

The researchers, including our astronomers here at Durham University, think that their measurements show the Universe might be growing more rapidly than previously thought.

Supermassive black holes give off radiation as they feed and are some of the brightest points of light in space.

They act as beacons providing scientists with a way to measure distance - as the Universe expands, the black holes move further away.

Researchers used this novel method to study the expansion rate of the Universe up to about one billion years after its birth.

Their findings suggest that the Universe could be expanding faster than expected.

One explanation might be that the density of dark energy – the mysterious force driving the expansion - changes through time.

A new set of rules might also be needed to refine the Standard Cosmological Model, which is currently used to explain the large-scale structure of the Universe.

Researchers used a combination of space and ground-based instruments to observe the ultra-violet and X-ray emissions of 1,600 supermassive black holes at various points in time across the Universe.

Previously researchers had used the light from supernovae – exploding stars – as a way of measuring the growth of the Universe, which is 13.7 billion years old.

However, this limited them to observations within a time period of up to four or five billion years after the Big Bang.

Black holes allow researchers to look even further back in time, providing them with a clearer picture of the expansion of the early Universe.

The next step in the research is to try to identify and measure the distance of black holes that exist even closer to the birth of the Universe.