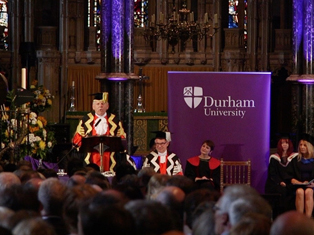 A Netflix pioneer and former Chief Product Officer, and a former police officer turned aid worker who braved the front-lines of then war-torn Bosnia & Herzegovina, are among those receiving honorary degrees from Durham University this week.

Bacon spent two decades as a police officer in Durham and seven years investigating corruption in Hong Kong, before leaving the local police force to lead a UK-based children’s charity in the former Yugoslavia.

In 2000, Bacon directed a programme to identify – through DNA – those who died during the conflict, including the Srebrenica massacre in which 8,000 Muslim men and boys were murdered. He was later awarded an OBE and presented with the European Commission Task Force Medal for his work in the Balkans during the wars.

As an Emergency Aid worker, Bacon co-ordinated a response in Sri Lanka to the 2004 Tsunami and he established an emergency aid programme following the 2008 cyclone in Myanmar.

Bacon will be awarded an Honorary Master of Arts and join thousands of graduating students at the awe-inspiring Durham Cathedral – part of a UNESCO World Heritage site, almost 1,000 years old.

After graduating from Durham University with a degree in Computer Science and Electronics in 1983, Hunt went on to become the first Chief Product Officer of Netflix – one of the world’s largest and most recognisable streaming platforms, with 104 million subscribers – before leaving the company last summer.

Hunt was a founding member of Durham’s Computer Science (CS) Department’s External Advisory Board, on which he helped create a brand new scholarship for Women in Technology – designed to attract more talented young women to the Department of Computer Science at the University.

Hunt is a supporter of the non-profit network Cancer Commons, which works to leverage the expertise of a diverse network of patients, physicians, and researchers to refine the world’s collective knowledge around cancer. His 2014 TEDx talk ‘Big Data Meets Cancer’ has been watched thousands of times, on YouTube. He will be awarded an Honorary Doctorate of Science.

de Laszlo is Patron of the Treloar School and College, for students with physical disabilities, and chairs the de Laszlo Foundation, which provides bursaries and research grants for science, art and education.

de Laszlo holds a broad array of executive and non-executive positions both in the UK and USA. He is a Patron of City & Guilds of London Art School and sits on the Advisory Board of the Royal Society of Portrait Painters.

Bacon, Hunt, and de Laszlo will join over 1,200 graduating students from 72 countries at Durham’s Winter Congregation ceremonies this Thursday and Friday. The Ceremonies will take place at the awe-inspiring Durham Cathedral – part of a UNESCO World Heritage site, almost 1,000 years old.

All the graduation ceremonies taking place throughout the week, will be live streamed online, to allow family and friends unable to travel to Durham to be part of the celebrations.