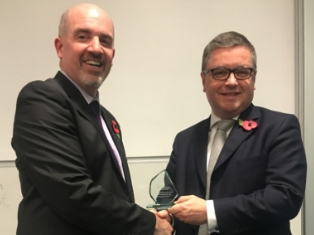 The Solicitor General for England and Wales has received the inaugural Dean’s Award for Achievement from Durham Law School.

Robert Buckland QC MP, a Durham graduate, received the Award from Professor Thom Brooks, Dean of Durham Law School, on a visit to Durham during which he also spoke to staff and students about his work at the inaugural Law School Annual Lecture.

Mr Buckland studied Law while at Hatfield College between 1987 and 1991, and is the first Durham graduate to become a Law Officer of England and Wales.

Conservative MP for Swindon South since 2010, he was appointed Solicitor General for England and Wales, one of the Law Officers of the Crown and a deputy of the Attorney General, whose duty it is to advise the Crown and Cabinet on the law, in 2014.

During his visit to Durham, Mr Buckland also spoke about the importance of Public Legal Education (PLE).

This followed the launch of the PLE vision statement the previous week, announced by the Solicitor General at an All-Party Parliamentary Group Public Legal Education and Pro Bono event.

PLE provides people with vital awareness of their rights as citizens, builds the confidence and skills they need to deal with disputes, and ensures that everyone has access to justice.

The Solicitor General took the opportunity to share the statement’s seven goals for the future of PLE and encourage the students to get involved with legal education initiatives.

He said: “I am hugely honoured to be receiving this award from Durham University, and I am grateful to have the opportunity to give something back by sharing some of my own experience with the Law School’s current generation of students.

“PLE not only has a tangible benefit on people’s lives, but it is hugely positive for our legal system too.

“I hope that my discussion about the vision statement and its goals with these students will help to serve as inspiration for a new generation of lawyers and drive forward our shared vision for the future of PLE.”

Professor Thom Brooks said: “Durham Law School is delighted to welcome back Robert Buckland QC MP to deliver our inaugural Law School Annual Lecture to our staff and students. He has a distinguished record as a Member of Parliament and Solicitor General.

“We are honoured to bestow him with the first Dean’s Award for Achievement in recognition of his becoming our first graduate to serve as a Law Officer of England and Wales. Our students were greatly inspired by meeting him.”