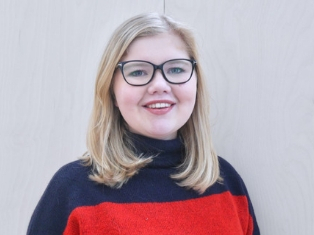 English Literature undergraduate Sophie Ainsworth, who campaigns to raise awareness of invisible illnesses in schools and education, has been honoured by the Prime Minister.

Sophie founded the Raising Awareness of Invisible Illnesses in Schools and Education’ (RAiISE) project, after being diagnosed with lupus, which causes the body’s immune system to attack a person’s own tissues and organs. She has now received the Points of Light volunteering award.

Praise from Prime Minister Theresa May

In a letter to Sophie, Prime Minister Theresa May said: “The Points of Light programme recognises outstanding volunteers who are making a real difference in their communities.

“Through RAiISE you are changing the mindset of teachers and peers who misunderstood your lupus diagnosis. Your organisation is challenging the misconceptions of invisible illnesses and giving young patients and their families invaluable support.

“Up and down the UK volunteers like you are helping to build a country that works for everyone. The Point of Light award is a small thank you on behalf of the whole country, in recognition of your exceptional service.”

Sophie, who is a member of Josephine Butler College, said: “I’m so delighted to have been awarded the Points of Light award.

“It’s incredible, and a little bit unbelievable, to know that my small organisation is getting recognised by the Prime Minister.

“It’s fantastic to have this awareness of both invisible illnesses and lupus. It was made particularly special as I received the award in October, which is Lupus Awareness Month.”

Professor Adrian Simpson, Principal of Josephine Butler College, said: “Everyone in the College will be very proud of Sophie’s achievement.

“The award she has received is not only apt recognition of her efforts, but will inspire all our other students and staff who undertake volunteering and charitable activities in the local community and nationally.”