Zooming onto the galaxy cluster Abell 370

Astronomers have captured a spectacular image of a massive galaxy cluster embedded among nearly thousands of previously unseen galaxies scattered across space and time.

The image of the Abell 370 galaxy cluster and its surroundings was made as part of the Durham University-led Beyond Ultra-deep Frontier Fields And Legacy Observations (BUFFALO) survey.

BUFFALO, led jointly by Durham and the Niels Bohr Institute in Denmark, is a new survey of the NASA/ESA Hubble Space Telescope aimed at expanding its view of largely uncharted regions of the Universe.

Several hundred galaxies can be seen in Abell 370, located about 4 billion light years from Earth, which lies at the centre of the new image.

The immense mass of galaxy clusters like Abell 370, mainly composed of the mysterious dark matter, bends and magnifies the light of these faraway objects, turning these clusters into natural telescopes.

This gravitational lensing effect allows scientists to see further into space beyond the cluster, by capturing the light emitted by very distant and faint objects.

The most stunning demonstration of gravitational lensing in Abell 370 can be seen just below the centre of the cluster. Nicknamed “The Dragon” this feature is a combination of five gravitationally lensed images of the same spiral galaxy that lies beyond the cluster.

Although Hubble has already detected some of the Universe’s earliest galaxies through its Frontier Fields programme, these fields are relatively small and might not fully represent the number of early galaxies in the wider Universe.

BUFFALO builds upon these observations using gravitational lensing, and will expand the search area around the six Frontier Fields previously observed by Hubble. Abell 370 is the first cluster to be observed.

BUFFALO will investigate how and when the most massive and luminous galaxies in the Universe formed and how they are linked to dark matter assembly – the constraining effects of which are an essential factor in how the Universe looks today. The survey will also learn more about the evolution of lensing galaxy clusters and will give clues on the nature of dark matter.

The first step is making a detailed a dark matter mass map of these massive galaxy clusters in order to measure exactly by how much the lensed galaxies are being magnified. The programme will determine how rapidly galaxies formed in the first 800 million years after the Big Bang – paving the way for observations with the upcoming NASA/ESA/CSA James Webb Space Telescope.

Dr Mathilde Jauzac, BUFFALO joint lead, in Durham University’s Centre for Extragalactic Astronomy, said: “By expanding the area that we map around each of these clusters, we will significantly improve our estimate of the clusters’ magnification, a mandatory step for studying the distant galaxies that BUFFALO will discover.

“Plus, BUFFALO will allow us to map precisely the distribution of dark matter in these massive clusters, and thus trace their evolutionary history, a missing piece of information in today’s evolution theories.

“BUFFALO represents an amazing opportunity to understand how dark matter assembles, interacts, and evolves in the most massive structures present in our Universe.”

As well as using Hubble, BUFFALO will also take advantage of observations from other space telescopes, including the ultra-deep Spitzer Space Telescope observations that already exist around these clusters.

* If you would like to join Durham University's Department of Physics, please see our list of current vacancies. Alternatively register your interest and we will contact you when vacancies are advertised. 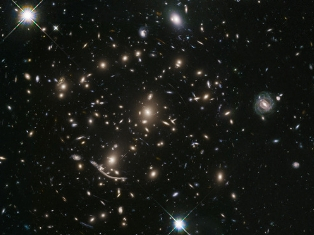