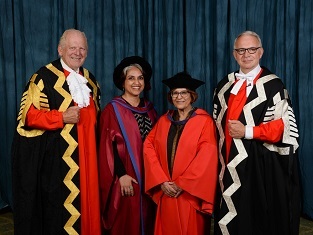 A Naval Commander, a High Court Judge, an Anthropology Professor and a leading historian have received honorary degrees from Durham University.

David Childs CBE spent almost 30 years in the British Royal Navy, achieving the rank of Commander. Later, he helped to establish the National Memorial Arboretum – commemorating the memories of British servicewomen and men.

A former Director of the Mary Rose Trust, Commander Childs is a frequent visitor to Durham University and has delivered both student and public lectures.

Commander Childs said he was “very surprised” and “hugely delighted” to receive an honorary degree from Durham University.

He went on to say he hoped “this honour will mark a continuing link between the National Memorial Arboretum and Durham University, in particular the Centre for Death and Life Studies which is contributing so much to our understanding of remembrance and memorialisation”.

After studying law at Durham University, Sir Andrew Ewart McFarlane was called to the Bar (qualifying to practise as a barrister) in 1977. He was appointed a Queen’s Counsel (a mark of a barrister’s outstanding ability, QCs are normally instructed in complex or very serious cases) 11 years later.

Sir Andrew was appointed a UK High Court judge in 2005 and a Lord Justice of Appeal in 2011. He is recognised for his longstanding and invaluable contribution to the family justice system.

Sir Andrew co-founded the Durham Revue – the University’s most established and renowned sketch comedy group – and was President of Durham Students’ Union.

He is closely involved with Durham Law School (in 2012 the Lord Justice McFarlane Prize was established to reward undergraduate students taking the LLB module on Law of Family Relationships) and is an active member of Collingwood College.

Reflecting on his award, Sir Andrew said: “I feel extremely honoured to have been awarded an honorary degree and I’m particularly pleased that I’ll ‘graduate’ on the same occasion as the current cohort of law students.

“I hope the juxtaposition of someone who stood in their shoes in time gone by, and who is now a senior judge, may help them realise that ‘you can get there from here’.”

Professor Veena Das is based at John Hopkins University, USA, where she is the Krieger-Eisenhower Professor of Anthropology. Before this, she spent over 30 years teaching at the Delhi School of Economics, India.

A Fellow of both the American Academy of Arts and Sciences and the Academy of Scientists from Developing Countries, Professor Das is a well-established figure in Socio-Cultural Anthropology.

Professor Das is known especially for her work on the anthropology of violence, public health, and ethnography; and her analyses of the relationship between anthropology and philosophy. She has previously lectured and run workshops – including a postgraduate masterclass – at Durham University.

Professor Das said she felt a “deep sense of contentment on getting the news about the honorary doctorate from Durham because, in the seventies, when my first book came out, it was the anthropological community in the UK that was the first to recognise its contributions, despite its unorthodox method and theory”.

Professor John Morrill is an expert on the early modern history of Britain and Ireland, and has written or edited 24 books and more than 100 essays and articles. He was a founding editor of The Bibliography of British and Irish History – a unique resource containing almost 600,000 records.

A Fellow of the British Academy and an Honorary Member of the Royal Irish Academy, Professor Morrill has been a Visiting Professor in Durham University’s History Department since 2015, offering invaluable support and expertise to postgraduate students.

Speaking of his award, Professor Morrill remembered how he “nearly came to Durham as a student in 1964”. Since then, he has been increasingly involved with the University “with every decade since”.

“The honour now bestowed upon me”, he said, “has special significance and is a special source of joy.”

A “very special occasion for our students”

Durham University’s Vice-Chancellor, Professor Stuart Corbridge, said: “Congregation is a very special occasion for our students who, through their dedication, intelligence and ingenuity, will take their place among the most sought after graduates in the world.

“It is always enriching and inspiring to see them receive their degrees, and I wish them every success for their next adventure.

“Our new honorary graduates are not only established experts in their fields, they are also role models for our students. It is a great privilege to count them among Durham University’s exceptionally strong roster of honorary degree awardees.”