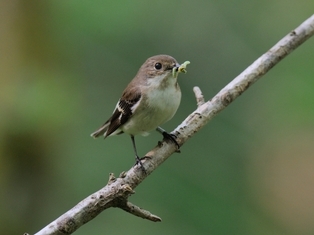 With continued spring warming expected due to climate change, scientists, including experts at Durham University, say hatching of forest birds will be “increasingly mismatched” with peaks in caterpillar numbers.

They also tested a theory that some bird species in southern Britain may suffer most due to a greater mismatch effect – but they found no evidence of this.

The findings, published in the journal Nature Ecology and Evolution, suggest that as springs warm in the future, less food is likely to be available for the chicks of insectivorous woodland birds unless evolution changes their timing of breeding.

Professor Steve Willis, in the Department of Biosciences, Durham University, said: “Woodland birds start to nest in anticipation of the timing of trees producing leaves, and of caterpillars emerging to eat the leaves.

“Our work suggests that birds are tending to mistime their nesting as springs become warmer, such that they miss the peak of caterpillar prey to feed their young.

“Across 200 nestboxes that we monitor in woodlands around Durham City, timing of breeding by blue tits is relatively consistent across different years, but the timing of oak leafing varies, being earlier in warmer years.

“It is difficult to know how this year’s blue tit nests will fare, given the late wintry weather and the recent fine weather this spring, but in recent years warmer springs have typically resulted in a mismatch between chick demand and caterpillar availability, sometimes resulting in very low numbers of chicks fledging.”

Dr Malcolm Burgess, of the University of Exeter and the RSPB, said forests have a short peak in caterpillar abundance, and some forest birds time their breeding so this coincides with the time when their chicks are hungriest.

He added: “With spring coming earlier due to climate change, leaves and caterpillars emerge earlier and birds need to breed earlier to avoid being mismatched.

“We found that the earlier the spring, the less able birds are to do this.

“The biggest mismatch was among pied flycatchers – as migratory birds, they are not in the UK in winter and therefore are much less able to respond to earlier spring weather.”

The study presents the first assessment of whether the mismatch effect is greater in southern Britain than the north.

It has been suggested that northern bird populations may be “buffered” from the effects of climate change in this way.

Dr Ally Phillimore, from the University of Edinburgh, said: “We found no evidence of north-south variation in caterpillar-bird mismatch for any of the bird species. Therefore, population declines of insectivorous birds in southern Britain do not appear to be caused by greater mismatch in the south than the north.”

First leafing dates of oak trees were collected by citizen scientists coordinated by the Woodland Trust via Nature’s Calendar, caterpillar abundance was monitored by collecting frass (droppings) beneath oak trees, and the timing of egg laying by blue tits, great tits and pied flycatchers were recorded by the British Trust for Ornithology's long-running Nest Record Scheme.