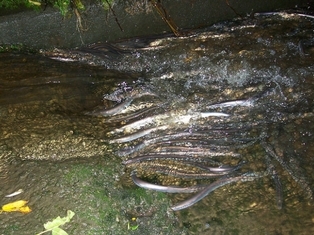 The density of barriers in European rivers is much higher than indicated by available databases – up to one barrier in every kilometre of river, according to a new study.

For the first time, scientists are now inviting citizens to help in updating information about these barriers with a newly-developed smartphone app.

A European initiative of scientists, hydropower and non-profit organisations called AMBER (Adaptive Management of Barriers in European Rivers) is exploring new solutions for river connectivity across the continent.

Scientists working for the project, including experts in Durham University’s department of Department of Biosciences, collected all available data on river barriers from across Europe, and then validated this data by going out into the field to survey a total of 1,000km of actual river.

The researchers found that the number of barriers recorded in existing databases only amounted to three per cent of the total number of river barriers in Europe.

Based on their first observations, they estimated an average ofone barrier per kilometre of river.

Researchers say there are hundreds of thousands of man-made barriers, scattered across Europe’s rivers, many of which are completely obsolete. Today, these barriers can provide energy, water, fishing and leisure opportunities, and might even prevent the spread of invasive river species.

However, they also present considerable obstacles to sustainable river management. Aside from presenting a potential flood hazard and subsequent costs to both the economy and the lives of local residents, barriers substantially change river ecosystems and block the natural swimways of migrating fish.

Eel, salmon and many other species all rely on complete connectivity between the sea and their upstream river habitats in order to complete their life cycle.

People are being asked to help improve connectivity of European rivers by using a smartphone app called Barrier Tracker (available on Android and IOS).

Using the app they can document or update the status of barriers that they come across along their local rivers. Information from the app is uploaded to a website (https://portal.amber.international/) to the barrier atlas. The smartphone app is available from iTunes and Google Play.

Dr Lucas said: “Researchers from AMBER were shocked to find so many barriers in most rivers.

“But the good news is that the launch of the new app will allow us to involve citizens who can help improve the situation.

“There are many examples of solutions and people who made a difference at local river stretches.”

One of the major reasons for the discrepancy between existing data and the data that AMBER collected from real rivers is that current databases mainly document barriers that are higher than 10m. In the field, the researchers found that many river barriers were much smaller than this.

Importantly, research suggests that these smaller barriers present a far greater problem for river connectivity – especially since they occur at such high density.

Recruiting citizens to help document small river barriers is a crucial step in maintaining healthy river systems across the continent, the researchers said.

The study was part of the EU-funded H2020 AMBER project. AMBER seeks to raise awareness of the problems posed by stream fragmentation, the pressures on freshwater ecosystems, and the need for innovative solutions to restore river connectivity.

The project is working with hydroelectric companies, water providers, NGOs, anglers and local authorities to restore river connectivity in a way that maximizes the benefits of water abstraction but reduces environmental impacts.