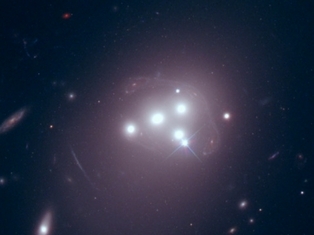 Astronomers are back in the dark about what dark matter might be, after new observations showed the mysterious substance may not be interacting with forces other than gravity after all.

Three years ago an international team of researchers led by Durham University thought they had made a breakthrough in ultimately identifying what dark matter is.

Observations using the Hubble Space Telescope appeared to show that a galaxy in the Abell 3827 cluster – approximately 1.3 billion light years from Earth – had become separated from the dark matter surrounding it.

Such an offset is predicted during collisions if dark matter interacts with forces other than gravity, potentially providing clues about what the substance might be.

The chance orientation at which the Abell 3827 cluster is seen from Earth makes it possible to conduct highly sensitive measurements of its dark matter.

However the same group of astronomers now say that new data from more recent observations shows that dark matter in the Abell 3827 cluster has not separated from its galaxy after all. The measurement is consistent with dark matter feeling only the force of gravity.

The latest findings are being presented at the European Week of Astronomy and Space Science (EWASS) meeting in Liverpool, UK, today (Thursday, 5 April). The research will be published in the journal Monthly Notices of the Royal Astronomical Society.

Lead author Dr Richard Massey, in the Centre for Extragalactic Astronomy at Durham University, said: “The search for dark matter is frustrating, but that’s science. When data improves, the conclusions can change.

“Meanwhile the hunt goes on for dark matter to reveal its nature.

“So long as dark matter doesn’t interact with the Universe around it, we are having a hard time working out what it is.”

The Universe is composed of approximately 27 per cent dark matter with the remainder largely consisting of the equally mysterious dark energy. Normal matter, such as planets and stars, contributes a relatively small five per cent of the Universe.

There is believed to be about five times more dark matter than all the other particles understood by science, but nobody knows what it is.

However, dark matter is an essential factor in how the Universe looks today, as without the constraining effect of its extra gravity, galaxies like our Milky Way would fling themselves apart as they spin.

In this latest study, the researchers used the Atacama Large Millimetre Array (ALMA) in Chile, South America, to view the Abell 3827 cluster.

ALMA picked up on the distorted infra-red light from an unrelated background galaxy, revealing the location of the otherwise invisible dark matter that remained unidentified in their previous study.

Research co-author Professor Liliya Williams, of the University of Minnesota, said: “We got a higher resolution view of the distant galaxy using ALMA than from even the Hubble Space Telescope.

“The true position of the dark matter became clearer than in our previous observations.”

While the new results show dark matter staying with its galaxy, the researchers said it did not necessarily mean that dark matter does not interact. Dark matter might just interact very little, or this particular galaxy might be moving directly towards us, so we would not expect to see its dark matter displaced sideways, the team added.

Several new theories of non-standard dark matter have been invented over the past two years and many have been simulated at Durham University using high-powered supercomputers.

“We will keep looking for nature to have done the experiment we need, and for us to see it from the right angle.

"One especially interesting test is that dark matter interactions make clumps of dark matter more spherical. That’s the next thing we’re going to look for."

To measure the dark matter in hundreds of galaxy clusters and continue this investigation, Durham University has just finished helping to build the new SuperBIT telescope, which gets a clear view by rising above the Earth’s atmosphere under a giant helium balloon.

The research was funded by the Royal Society and the Science and Technology Facilities Council in the UK and NASA.