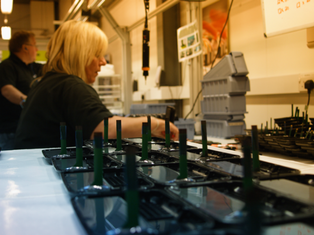 Durham University is leading a new project which will see the North East of England’s universities join forces to commercialise research and boost the region’s economy, with £4.9m in Government funding from the Connecting Capability Fund (CCF).

The (CCF) award, made by Research England, was announced by the UK’s Secretary of State for Business, Energy and Industrial Strategy, Greg Clark. The project will see Durham, Newcastle, Northumbria and Sunderland universities working together to make a step change in delivering research to the market place and to develop entrepreneurship amongst their academics through an ideas impact hub and associated proof of concept support.

The project will build upon, and take its name from, the existing Northern Accelerator programme – a collaboration between Durham and Newcastle universities that has built a network of entrepreneurs who are embedded at the earliest stages in the universities’ spin-out companies.

The newly announced project also aims to establish an ongoing North East University Investment Fund (NEUIF) to support research based spin-out companies in the region long-term after the CCF funding comes to an end.

Professor Stuart Corbridge, Vice-Chancellor and Warden, Durham University, said: “Durham University is proud to be leading this ambitious project, which will build on the considerable strengths that the region’s universities have in research and innovation.

“Our researchers are helping to shape future industries including medical imaging, nuclear detection and Graphene production and formulation methods for nanotechnology. The Northern Accelerator will create more exciting opportunities for innovation, collaboration and research commercialisation.”

It is hoped the project will build upon the current success of university spin-out companies, encouraging more start-ups and enhancing the region’s economy.

Examples of successful research commercialisation at all stages can be found across the partner universities. Examples at Durham University include:

The newly announced project will focus on four key areas of regional strength – advanced manufacturing, the chemicals and process sector, life sciences and healthcare and digital.

The project will support the ambitions for high skills job growth in these key sectors as identified by the strategic economic plans of both the North East Local Enterprise Partnership and Tees Valley Combined Authorities.

The Northern Accelerator project will be chaired by a strategic advisory board made up of leading figures from academia and business.

Roy Sandbach OBE, Chair of the Northern Accelerator Strategic Advisory Board, said: “Our North East universities do world-class research not just for knowledge creation but to deliver national and regional economic prosperity and employment.

“This award supports a leading-edge approach to the engagement of academia with business expertise, providing start-up advice, development and long-term funding.

“It will be a game-changer for the North East’s economy and a vital contribution to the delivery of the regional strategic economic plans.”

The CCF-funded Northern Accelerator project will run until 31 March 2021.

For more information about the Northern Accelerator project visit