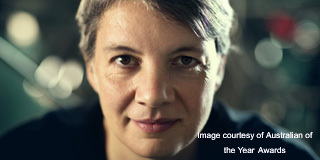 Durham alumna Professor Michelle Simmons has been named 2018 Australian of the Year.

Michelle (Physics & Chemistry of Materials, Trevelyan College, 1985-88 and Physics PhD, St Aidan's College, 1988-92) is now a Physics professor at the University of New South Wales, leading pioneering research that could result in a quantum leap in computing.

The accolade, Australian of the Year, was awarded to Michelle as part of the recent Australia Day celebrations.

At Durham, Michelle studied Physics and Chemistry and stayed here to do her PhD. “A Physics PhD is, in a sense, a passport to the world,” Michelle said in her Australia Day address.

After leaving Durham, Michelle was a Research Fellow in Quantum Electronics at the Cavendish Laboratory in Cambridge where she gained an international reputation for her work in the discovery of the ‘0.7 feature’ and metallic behaviour in 2D gas hole systems.

In 1999 Michelle left Britain for Australia and soon transformed the University of New South Wales’ Quantum Physics department into a world leader in advanced computer systems.

In 2007, Michelle became an Australian citizen. She established a large research group dedicated to the fabrication of atomic-scale devices in silicon and germanium using the atomic precision of a scanning tunnelling microscope. Michelle and her team created the world’s first transistor made from a single atom, along with the world’s thinnest wire.

“We have achieved tremendous success in our endeavour, largely because we gave things a go that the rest of the world didn't dare to try.”

At the forefront of what she calls the “space race of the computing era”, Michelle aims to build a quantum computer able to solve problems in minutes that would otherwise take thousands of years. Such a discovery has the potential to revolutionise drug design, weather forecasting, self-driving vehicles, artificial intelligence and more.

An evangelist for Australian scientific research and a role model to young scientists everywhere, Michelle actively encourages all students – girls and boys – to dream big, challenge themselves and to achieve ambitious goals in science.

“Quantum Physics is hard. Technology at the forefront of human endeavour is hard. But that is what makes it worth it. I strongly believe that the things that are most worth doing in life are nearly always hard to do.”