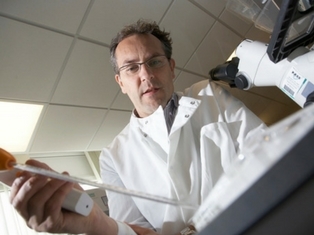 Alvetex, developed at Durham University’s Department of Biosciences, is a highly porous polystyrene scaffold designed to support 3D growth of human tissues from cells cultured in the laboratory – such as skin and intestinal tissue - that closely resemble those found in the body.

Bought by Japanese firm REPROCELL in 2014, and renamed REPROCELL Europe Ltd following its merger with human tissue specialist Biopta, the company has recently opened its new European headquarters in Glasgow, UK, in addition to the NetPark facility.

Past projects include the use of Alvetex technology, developed using funding from the Biotechnology and Biological Sciences Research Council, aboard the International Space Station to investigate bone loss during bed rest, in microgravity or through diseases such as osteoporosis.

Reducing numbers of animals in research

Professor Stefan Przyborski, in Durham University’s Department of Biosciences, led the academic research and founded the business upon which Alvetex was commercialised. He is the driving force in the development of novel human tissue models to advance discovery and reduce animal usage.

Professor Przyborski, who is also REPROCELL Europe Ltd’s Chief Scientific Officer, said: “The ability to grow cells in three-dimensions stemmed from basic research in our research labs at Durham University.

“We have since adapted that technology to be able to grow human tissues in-vitro in the lab, which has tremendous potential benefits for future research.

“By modelling the anatomy of human tissue, which can be manipulated to simulate certain disease types, we can more effectively study the effects that drugs or other chemicals might have on these tissues.

“This also has benefits for reducing the numbers of animals used in research, as scientists are able to carry out research on more realistic human tissue models.”

Professor Przyborski is a member of the Board of Directors of the NC3Rs. He is also the President of the Anatomical Society, which promotes the principle that “structure is related to function”. This is important in the understanding and development of advanced in vitro models that are designed to mimic real human tissues.

Professor Przyborski has also recently authored a book, Technology Platforms for 3D Cell Culture: A User’s Guide, which points to the options available to perform 3D culture, shows where such technology is available, explains how it works, and reveals how it can be used by scientists working in their own labs. The front cover of the text depicts the structure of a tissue model of human skin, revealing almost identical anatomical structure to that of the real human epidermis.

Professor Przyborski also participates in the organisation of national and international conferences on 3D cell culture technologies where he presents the most recent findings of his research group on human 3D tissue models.