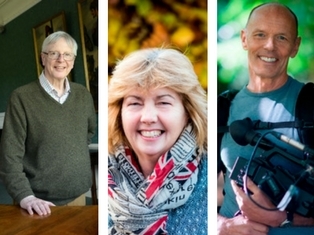 A leading philanthropist, a pioneering filmmaker and a children’s champion were awarded honorary degrees as thousands of students graduated from Durham University.

The University held five Winter Congregation ceremonies on Thursday 11 January and Friday 12 January. Around 1,300 students from over 70 countries graduated, celebrating their hard work and achievements together with relatives and friends in the stunning surroundings of Durham Cathedral, part of the UNESCO World Heritage Site.

This year, for the first time, ceremonies were live streamed online, so friends and relatives unable to attend could watch Graduation as it happened, live from the Cathedral.

Durham graduates go on to enjoy a range of interesting and varied carers, as well as joining the University’s international alumni network. The University was included in the world top 50 for employer reputation in the 2018 QS Graduate Employability Rankings.

Jonathan Ruffer is an investment banker, art collector and philanthropist. In 2012, he purchased a series of paintings by Spanish master Francisco de Zurbarán, as well as 900-year-old Auckland Castle, County Durham, where they have been housed for more than 250 years.

To keep the paintings for the people of North East England and beyond and give them access to the beautiful Castle, Mr Ruffer established The Auckland Castle Trust – now known as The Auckland Project.

The charity is transforming Auckland Castle into an arts, faith and heritage destination of international significance, with the aim of helping to revitalise Bishop Auckland through employment, training and educational opportunities.

On being nominated for an honorary degree, Mr Ruffer said: “I’m delighted. Durham University is the pride of the county, and it is a pleasure to be more closely associated with it. My grandfather was professor of Medicine there a century ago, and I am sure he would be pleased, too.”

Chris Terrill is a pioneering anthropologist, adventurer, author and filmmaker. He won an Emmy Award for Outstanding Investigative Journalism for his film Ape Trade and a Royal Television Society Award for Innovation for his series Soho Stories.

After 21 years at the BBC, he set up his own company, Uppercut Films, in 2004, focusing on communities in conflict zones or threatened by natural hazards.

Mr Terrill holds a joint honours degree in Anthropology and Geography from Durham University and maintains close links with the Anthropology Department.

Wendy Shepherd has devoted decades to improving the situation of children, young people and vulnerable adults who have experienced sexual violence, exploitation and trafficking.

She recently retired after 25 years leading the Barnardo’s Sexual Exploitation Children’s Outreach Service (SECOS), which received the Queen’s Award for Voluntary Service in 2004.

Ms Shepherd received the Diana Award for supporting child participation in service delivery in 2015 and Lifetime Achievement Award from the Police and Crime Commissioner for Cleveland in 2016. She has advised on research from Durham University’s School of Applied Social Sciences and facilitated placements for Durham students at Barnardo’s.

Professor Stuart Corbridge, Vice-Chancellor of Durham University, said: “I congratulate all of our graduates and wish them well as they embark upon the next chapter of their lives.

“Durham graduates are among the most sought after in the world, and we hope that the connections with Durham these students have developed during their time here will continue as they become members of our international alumni network and make an impact around the world.

“All three of our honorary graduates are great innovators in their field and I am sure our students will draw inspiration from them.”

Also attending the ceremonies were alumni who graduated from Durham University 50 years ago and a group of Chelsea Pensioners, guests of current student Tina Kilnan, who studied the veterans’ group for her dissertation.

Click here to watch the Winter Congreagtion ceremonies live from the Cathedral.

Visit the Student Blog site to find out about some of our alumni who were invited back to Durham to celebrate the 50th anniversary of their graduation in 1968.