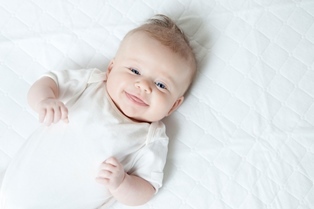 Research that has helped to shape the way babies sleep and how parents care for them at night-time has been given the Royal seal of approval.

The Parent-Infant Sleep Lab at Durham University has been awarded the Queen’s Anniversary Prize for Higher Education - the highest accolade for any academic institution and part of the national honours system in the United Kingdom.

The prize from the Royal Anniversary Trust has been awarded to Durham University for ‘leading influential research on parent-infant sleep with a widely-used public information service’.

The awards are approved by The Queen on the advice of the Prime Minister from recommendations made by the Royal Anniversary Trust.

Working together with partner organisations, the research of the Parent-Infant Sleep Lab in the Department of Anthropology has helped to reduce rates of Sudden Infant Death Syndrome (SIDS) through evidence-based advice for health professionals and parents.

Projects include those that have looked at the risks and benefits of bed-sharing with babies; safer sleeping arrangements for twin babies; physical closeness between mother and baby on the postnatal ward and what this means for breastfeeding; how parents understand infant sleep development; and use of so-called ‘baby bed boxes’.

As a result of the Lab’s research, the use of side-car cribs on postnatal wards has spread from the UK to Europe, USA and Australia. Side-car cribs are cots that can be attached to the mother’s bed without a barrier between the two, keeping mothers and babies close with benefits for breastfeeding and responsiveness to babies in the early postnatal period.

Professor Helen Ball, Director of the Parent-Infant Sleep Lab at Durham University, said: “We have seen some substantial changes in how parents and health professionals think about baby sleep, directly relating to research we have published and shared.

“While there is plenty more to do in learning how best to support parents through this crucial period, it is amazing to hear our work quoted back to us when we speak to health professionals and parents.

“To receive recognition for this work via the Queen’s Anniversary Prize is tremendously rewarding, and we are most grateful to all the organisations and individuals who have shared our work and translated it into policy and practice.”

The Sleep Lab’s online Infant Sleep Information Source, run by Professor Helen Ball and Dr Charlotte Russell, which has been accessed more than two million times from countries across the world, is shared and recommended by parents and health professionals as a reliable evidence-based home of information on normal infant sleep.

Durham University’s Vice-Chancellor, Professor Stuart Corbridge, commented: “We are hugely honoured to receive this prestigious award, which recognises the immensely valuable and wide-reaching impact of the research carried out by the team in the Parent-Infant Sleep Lab.

“At Durham, we aim to deliver research that is world-leading and world-changing and the work of the Parent-Infant Sleep Lab is a perfect example of this commitment.”

The team’s expertise and research is used by organisations in the UK and beyond, including by Unicef, NHS Trusts, Lullaby Trust, La Leche League, Department of Health, National Childbirth Trust, NHS Choices, Scottish Maternal and Child Health Division, National Institute for Health and Care Excellence and the Twins and Multiple Births Association among others.

Sue Ashmore, Director of the Unicef UK Baby Friendly Initiative, said: “Unicef UK has worked with the Sleep Lab team at Durham University for many years. The team conduct practical, relevant primary research which is widely used to inform practice in midwifery, health visiting and nursing.

“The team are not afraid to challenge the accepted status quo when the evidence justifies this and we at Unicef UK are very grateful for the determined stance they have taken to promote and protect the best interests of mothers and babies at all times.

“They also produce accessible and innovative resources for professionals and parents which are grounded in the reality of new parents’ lives and so widely used across the UK.”

Research studies are conducted in people’s homes, in hospitals and in Durham University’s own sleep lab where parents and babies can be observed during the night with cameras and via breathing, heart rate and temperature monitors.

Lynne McDonald, Infant Feeding Coordinator at the Newcastle Hospitals NHS Foundation Trust, commented: “We are very proud of our continued collaboration with Durham University researching how best to support women to feed and get to know their babies whilst ensuring a safe sleep environment.

“Our well-established relationship continues to be invaluable in informing the delivery of care in the immediate postnatal period, helping us to drive forward improvements in care.”

From local to global

The Queen’s Anniversary Prizes for Higher and Further Education are awarded every two years by The Queen to honour excellent and innovative work of outstanding public benefit. The prizes will be formally presented at a ceremony at Buckingham Palace in February.

The Infant Sleep Information Source was set up in 2012 with funding from the Economic and Social Research Council (ESRC) in collaboration with UNICEF UK, La Leche League and the National Childbirth Trust, and continues with support from Durham University.