Exploring why some primates have bigger brains 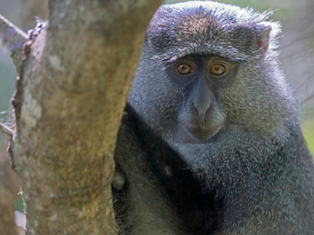 The accepted view of why some primates, including apes and humans, have evolved to have large brains is contested in new research from the Department of Anthropology. The study also questions whether brain size is a useful indicator of cognitive ability.

The research project, led by PhD student Lauren Powell, and published in Royal Society’s Proceedings B journal, has found little evidence to support a long-held view that larger brains have developed to help primates cope with increasingly complex social structures – known as the Social Brain Hypothesis.

The research also uncovered problems with the most commonly used approach to tackling the issue, which looks for correlations between brain size and behaviour. As a result, the team argue that a fundamental shift in how the evolution of the brain is viewed and studied is needed.

Lauren Powell said: “Our research has shown that the traditional approach of looking for correlations between brain size and behaviour may not tell us much.

“To better understand the evolution of the brain, we need to stop thinking of it as one single organ, and instead view it as a complex mosaic, in which different components specialise in different functions.

“It is unlikely that the way these different components evolve can be explained by a single factor, such as social complexity.”

The study brought together two large datasets on primate brain size and used a wide range of variables to provide what the team believes is the most complete and detailed study of its kind to date.

The analysis covered over 140 primate species including apes, monkeys, chimpanzees and lemurs.

The aim was to determine whether reliable results emerge when using different data, and ascertain why a consensus has not been reached by researchers working on the two major theories for primate brain evolution.

The two key schools of thought in this field are the Social Brain Hypothesis and a competing theory that brain evolution is as a result of ecological factors such as feeding patterns and the size of the home-range within which primates live.

Whilst the team found little evidence to support the Social Brain Hypothesis in their study, they did find some correlation between brain size and ecological factors.

New approach to the study of brain evolution

However, the factors identified differed depending on which behavioural dataset was used, indicating that new approaches will be needed to obtain definitive results.

Professor Robert Barton of the Department of Anthropology said: “The traditional approach does not seem reliable as we found that relationships between brain size and certain factors, such as social complexity or ecological factors, are highly sensitive to data changes.

“We think part of the problem is relying too heavily on overall brain size.

“As a result, the total brain size of day- and night-active primate species doesn’t differ much, even though the structure of the brain and the way it processes information is clearly different.

“We hope that our study will stimulate other researchers to study brain evolution with more sophisticated measures of both brain and behaviour.”