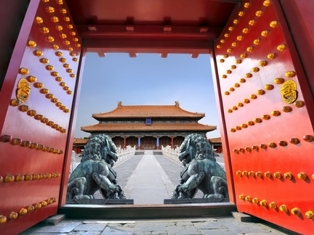 Archaeologists from Durham University in the UK have become the first UK team to excavate inside the walls of the Forbidden City in Beijing, China.

The team carried out an archaeological dig alongside colleagues from the prestigious Palace Museum in May this year.

The excavation was part of a wider new partnership between the Palace Museum and Durham University involving collaboration on research, cultural engagement and sharing of archaeological techniques and methods.

So far, only eight excavations have taken place within the Forbidden City which were all led by archaeologists from the Palace Museum.

Dr Derek Kennet, Associate Professor in the Department of Archaeology at Durham University, UK, said: “It is a great honour to have been invited to excavate in the Forbidden City and to work closely with esteemed colleagues from the Palace Museum on this project.

“Archaeological insights are so crucial in learning more about the early history of cities, countries and cultures and we hope that this work will add to the understanding of the development of this iconic palace of national and international significance.”

Durham University and China’s Palace Museum signed an agreement in December 2016, bringing together the two world-renowned centres of research and cultural excellence for the first time, which builds on Durham University’s already strong links with China.

Researchers from the University’s Department of Archaeology, which is ranked in the top four in the world in the 2017 QS World University Subject Rankings, will work with Chinese colleagues to study the historical distribution of ancient Chinese traded cultural artefacts in the Middle East and Europe, some of which are over 1,000 years old.

The agreement will also involve collaboration on teaching and sharing of expertise as well as potential joint museum exhibitions. Durham University is home to over 1,700 students from China and offers a Bachelor of Arts degree in Chinese Studies.

The team of archaeologists, made up of academics and a PhD student, excavated a small trench underneath one of the paved courtyards of the Imperial Palace, at the east yard of the Cining Palace Garden archaeological site.

They investigated the complex sequence of layers that underlie the courtyards.

As part of the visit, the two teams compared and shared their excavation methods, skills, recording systems and post-archaeological ways of working.

The Palace Museum is one of the most visited art museum in the world and holds vast collections of paintings, calligraphy, ceramics and antiquities.

Durham University’s Oriental Museum is also home to one of the UK’s leading collections of Chinese artefacts, including ceramics, silks, paintings and one of the largest holdings of jades and hardstones in the country. The Oriental Museum’s Chinese collection was awarded Designated Collection status by Arts Council England in 2008, placing it amongst the best collections in England.