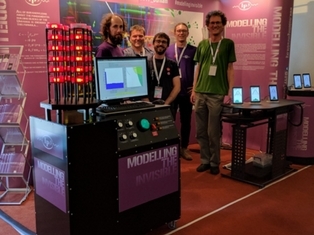 Durham University’s Institute for Particle Physics Phenomenology (IPPP) took part in the Royal Society Summer Science Exhibition this year for the first time, with an exhibit entitled Modelling the Invisible.

Here Dr David G. Cerdeño, Assistant Professor at the IPPP explains how they made complex physics accessible to a general audience and the benefits of taking part in events such as this.

Tell us about your exhibit ‘Modelling the Invisible’.

Our exhibit aimed to introduce people to the work we do at the IPPP using numerical simulations to understand fundamental physics, and challenged visitors to think as a scientist who is planning an experiment. Based around two areas of our work we prepared simplified experiments that visitors could perform by themselves in order to see how computational methods are used to solve very complex problems – in this case how we look for hidden particles and dark matter.

The second experiment was a replica of SuperCDMS, a world-leading dark matter detector in which the IPPP participates. SuperCDMS will be built in 2018 and will look for dark matter particles with unprecedented sensitivity. Through our exhibit, visitors could help us design the future detector, by selecting the depth of the experimental site, the amount of shielding around our detector, and the purity of the materials. Using our numerical models, the visitors learned how to reduce the ‘background signals’ that we know are not really due to dark matter. The goal was to observe a hidden dark matter signature that we have computed using particle physics models.

How did your exhibits reflect the work of the IPPP?

The equivalent of the numerical simulations identifying the hidden shape are huge computer programmes - so called Monte Carlo simulations - that were used to find the Higgs boson at the Large Hadron Collider (LHC). Just as we could not see the hidden shape in the simplified experiment we also could not see the Higgs boson in the LHC directly. We only see a messy distribution of numerous elementary particles that were produced in the collision and from that we have to deduce whether a Higgs particle (our desired hidden shape) was produced in the collision point. The IPPP hosts two of the world leading Monte Carlo programs, HERWIG and SHERPA.

The dark matter experiment is a simplified version of the SUPERCDMS dark matter detection work the IPPP is participating in. Here we are using our expertise to understand all of the background interactions that this experiment may detect, but that are not due to dark matter. So, much like in our exhibit, our work on the SUPERCDMS helps to fully understand the known physics so we can in turn identify the unknown, in this case dark matter.

How does the IPPP hope to benefit from participating in this event?

We are the national institute for particle physics phenomenology and we want to make the general public more aware of the kind of physics we do at the IPPP. We would like to get people interested in fundamental physics and of course try to attract prospective students.

Besides preparing the experiments for the exhibit, we also set up a webpage with an interactive ‘ask a scientist’ function, a twitter feed and created a video, which has had several thousand views already.

Moreover we plan to regularly reuse the exhibits for events like Durham University’s Celebrate Science week and open days, where we can also distribute a special brochure and flyer that were designed to accompany the exhibition.

*The Raspberry Pi foundation has written a blog about the IPPP’s use of their computers in the Royal Society Summer Science exhibition which you can read here.