Making a difference beyond graduation 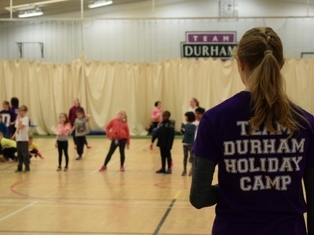 IT may be nearing the end of the academic year, but Durham University has many family and learning activities on offer right through the summer.

The University’s attractions, including Palace Green Library, the Oriental Museum and Durham Castle, are open all year round, with special events and exhibitions taking place during the summer months.

Palace Green Library is hosting the Time Machines exhibition until September and there are related film screenings and talks, while children visiting the Oriental Museum can see the real artefacts that inspired CBeebies’ Teacup Travels.

Elsewhere, many students are staying in Durham to volunteer at Team Durham community summer camps.

Student fundraising for local charities continues through the summer and students will also be taking part in the National Citizen Service and outreach into schools.

In total, Durham students undertake 14,000 hours of volunteering each year – and student spending is worth £137 million a year to the local economy.

But it’s not only while studying that Durham students make a positive difference to the region. Many remain after they graduate – making North East England the second most popular destination for Durham graduates, after Greater London.

Among the many examples are Edward Twiddy, who after studying at the University founded Atom Bank, which now employs 300 people in Durham City, and Ian Baggett, who is founding Chief Executive Officer of Adderstone Group, one of the largest private property firms in North East England.

Deborah Jenkins MBE DL, who studied for an MBA at Durham, is Chief Executive of TDI, a charity working to reduce the risk of sexual offending; Independent Chair of the Northern Neonatal Network; and Chair of Together for Children, which runs children’s services in Sunderland.

Giselle Stewart worked in NHS management in North East England before moving into the gaming industry, where she is now Director, UK Corporate Affairs at Ubisoft. She is a trustee of North East Futures University Technical College, opening in September 2018, and Vice-Chair of Dynamo North East, working to build IT excellence in the region.

As a student ambassador, Ricky Lee worked to encourage young people from North East England to apply to university. He stayed in the region after graduating and now teaches in a primary school in Teesside. Richard Coldwell was also a student ambassador and now works for the University, with responsibility for Sutton Trust summer schools and the Supported Progression programme.

Mark Laycock was born and raised in Hartlepool and, having played rugby for the University while a student, he is now Academy Manager at Newcastle Falcons.

Professor Stuart Corbridge, Vice-Chancellor of Durham University, said: “We are proud of the positive contribution the University makes to North East England, economically, culturally and socially.

“Our students do valuable work in and out of term time, and many fall in love with the region and stay here after graduating, going on to serve and excel in many different fields.

“As we approach the end of a very successful academic year for the University, I would like to once again thank our host communities and invite them to enjoy the great range of activities taking place over the summer – starting with our graduation week (June 27-30), which always brings a great sense of joy to the city.”